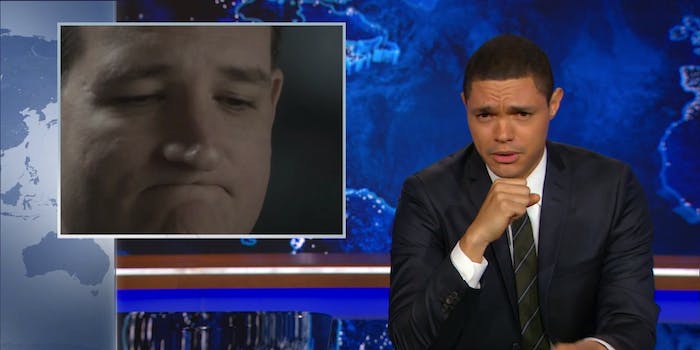 Republicans and Democrats finally have something they can agree on: how much they hate Ted Cruz.

This article contains an autoplay video.

Trevor Noah was disgusted with how one politician reacted to the San Bernardino shooting on Wednesday—and no, it had nothing to do with his “thoughts and prayers.”

Shortly after Sen. Ted Cruz (R-Texas) offered his condolences to the victims, his campaign decided to continue with a Second Amendment campaign event that will take place at a gun range in Iowa Friday, just two days after the shooting. And considering how those events transpired, Noah is taking Cruz to task for it—although it’s not exactly that much of a surprise.

“Yeah, 14 people just lost their lives in a shooting, and Ted Cruz’s first thought is, ‘Oh, that reminds me, got to send out my invites to my gun party,’” Noah said. “That seems like something you would only do if you were an asshole, which it turns out is exactly what voters are looking for.”

But by looking both at Cruz’s policy hypocrisy over the ages and just what people thought of him, Noah realized something: Cruz is finally the person who can bring Republicans and Democrats together—because of how much they both hate him.

Noah had an even bigger field day after discovering 18 hours of unedited Cruz campaign footage on YouTube—released as an unsubtle way for him to legally share ad material with his Super PACs—that mostly show awkward family interactions and his family telling him how great he is. On its own, the footage is pretty bad, but once the Daily Show team gets its hands on the video, it easily turns to comedy gold.

And the best part is, the footage is all there for the taking. The Daily Show already made horror and classic-sitcom versions, but there was simply too much footage for even Noah’s staff to get through. So he’s offering his audience the chance to #CruzYourOwnAdventure and make their own Cruz parodies, some which might end up on the air.