He’s already settling in quite nicely.

While Trevor Noah doesn’t officially take over until next month, Comedy Central is already rolling in the next era of The Daily Show on social media less than two weeks after Jon Stewart’s departure.

Stewart’s social media channels have been largely silent since he took his final bow on Aug. 6, but today the official Daily Show accounts debuted a new look. Instead of Stewart’s face (which was featured as recently as a few days ago), it is now Noah’s that graces The Daily Show Facebook and Twitter accounts.

Comedy Central also debuted what looks to be the new Daily Show logo , which showcases the show’s premiere on Sept. 28.

Noah already demonstrated what The Daily Show might look like under his reign (and even took out the tape measure on Stewart’s last show), but now he can stretch out his legs without getting in the way of his predecessor. As his latest promo says, “Same chair, different ass.”

Fans, for their part, received the news with mixed emotions, with some bemoaning the switch and others eagerly anticipating the new era. 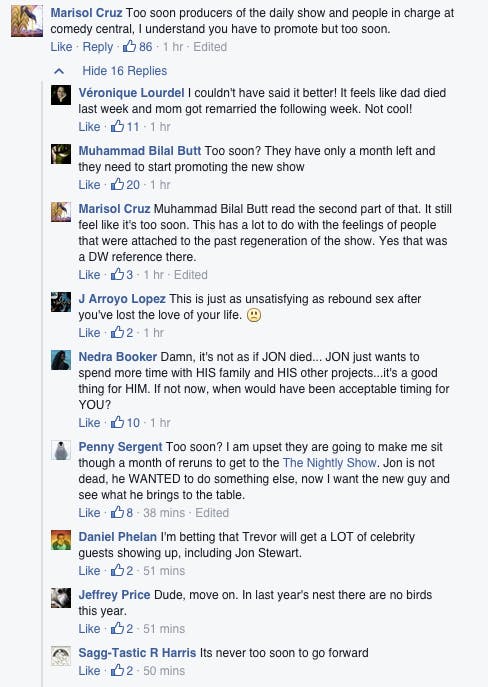 We’ll all find out what awaits us when The Daily Show With Trevor Noah premieres Sept. 28.Screengrab via Comedy Central/YouTube