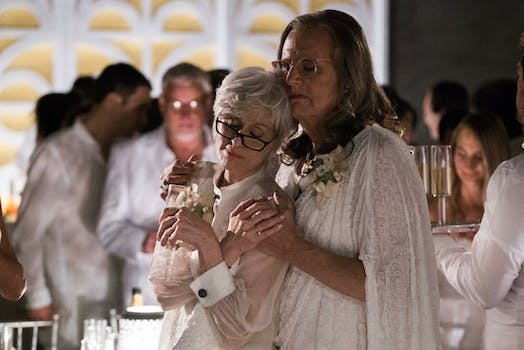 I’ve never wanted to strip off all my clothes on camera more than I did on the set of 'Transparent.'

I’ve never wanted to strip off all my clothes on camera more than I did on the set of Transparent.

Even before Transparent premiered in 2014, I knew it was going to to be a standout show for me. With television a wasteland of trans storytelling, Transparent was part of the movement to change trans representations in mainstream media. Focused on the Pfefferman family, the show centers around their patriarch coming out late in life and the stunted growth of the rest of the family as they come into their own sexualities, genders, and identities. Amid concerns from the LGBT community that it wasn’t representative enough, accolades rolled in, including Golden Globe and Emmy awards.

Now, I was going to be an extra on the show, and I’d foolishly turned down the option to do it in the nude.

A friend tipped me off to a casting call for extras for a two-day shoot. After you sent a preliminary email, the production staff shot you one back asking if you wanted to be fully nude, just topless, or clothed for the duration. The less clothing you had on, the higher the pay jump. I thought seriously about the idea of being naked in the background of one of my favorite TV shows, and I even asked my mother what she thought about the prospect. She said I should do it, but knowing that at least one close friend would email me a screenshot if any part of my naked body appeared on Amazon for even a split second made me say no. I’ve taken great care to keep my naked self off digital media, and Emmy or not, I wasn’t going to change that, even for a story. Of course, I changed my mind almost the moment I stepped on set. For one thing, there was the heat: We were filming on a farm in the Valley, which is notoriously hot on a normal day in Los Angeles, let alone during an unfortunately timed heat wave. My character was apparently going in the exact opposite direction of the rest of the nude crowd. After the wardrobe stylist deemed all the clothes I’d brought along “too nice,” I ended up in a pair of pants and long-sleeved cotton top, with a pattern that hinted vaguely at cultural appropriation. I topped it off with a straw hat I bought so I could have some personal shade for what would turn into a very long day.

At Transparent’s version of a Womyn’s Festival, practically every third extra was nude.

Within five minutes on set, I was jealous of everyone who didn’t have layers of stiff fabric flush against their skin. We were all sweating, but I was just marinating, pretending to be carefree and making mimed conversations with other women who were able to just let the sweat roll off them and evaporate into the air. A few people wondered if we were allowed to strip down, but if you didn’t get the pay bump at the start of the day, you couldn’t get it retroactively just because you were hot. I’m frugal, and I am not going topless on the Internet without at least decent pay, so I decided to sweat it out.

But beyond the fiscal issue and the sweat, what really made me want to be nude that day was the atmosphere of the set itself. Most sets looking for nude extras tend to be highly sexualized or trivialized; you go nude as an extra in an orgy scene, or perhaps as a streaker to be laughed at. At Transparent’s version of a Womyn’s Festival, practically every third extra was nude, just standing around and doing her own thing. The only men on set were crew, and they were, at least in my experience, respectful. Honestly, they were invisible to me, thanks to the sheer level of feminine energy around us. The festival may have been staged, but the emotions of an all-female space were real. On the set of ‘Transparent’

When the principal cast walked on, they milled around with us, offering thanks and chatting with extras between takes. Jill Soloway, Transparent’s creator, sporting a practical swimsuit herself for directorial duties, sat down under a tent with the elderly extras who’d camped out there during the repetitive wide shots. At one point, I sat under a tree with a stranger’s head in my lap, braiding and unbraiding her hair, take after take, and I felt content, almost unaware of the camera sliding by us. Peaches came out on day one for a musical performance, with lesbian stalwarts Indigo Girls on the second day of shooting. Overall, the set felt like a female wonderland, which became an interesting contrast when the topic of the episode began to come to light.

While we were all feeling comfortable, the story revolved around lead character Maura’s discomfort upon learning the festival is for “women born women”—not trans-inclusive. In the finished episode, viewers watch her experience head-on confrontations at the event (filmed away from the eyes of extras) and perceive her internal struggles; it was such a stark contrast to the vibe of the set that it hurt me even more to watch the final cut.

In the end most of my day was spent walking: walking to a spot, then walking back to another place, and then walking again. Each time they yelled “Action!” I had to mill about, making our background cast of 100 or so seem larger. I made small talk with a mix of people, from an accomplished lesbian poet who was there, topless, as a guest of production, to serial extras who made their living on these gigs, to starry-eyed hopefuls looking for their big break. At one point I held hands with a topless set intern who was working on her day off as we crossed repeatedly in front of Jeffrey Tambor, who encouraged us all to act with him as we made eye contact and murmured our shock or confusion, as directed by Soloway. My potential big break came during a scene with Amy Landecker, the oldest child of the Pfefferman clan. The assistant director decided to keep sending me for “crosses” in the line of the camera, and then sent me to stand and listen to a music performance. A fellow extra told me with glee afterward that I was directly in the one shot they took of Landecker from a single angle in that scene. I’m somewhere on the cutting room floor, though—all frames of me, my awful outfit, and my giant hat lost to edits. The scene of dialog I sat directly behind while braiding hair doesn’t even exist in the final cut. The woman I held hands with makes the corner of a frame, presumably with me just beside her, as the camera cuts to a new scene.

After my fleeting brush with digital fame, and I regretful that I didn’t go nude, in the end? I probably would have gotten actual screen time that way, but ultimately I am just not cut out for the life of an extra. At lunch break I sat down and ripped my pants, earning me a stern glare from the wardrobe department, and a reluctant return to my own jean shorts. While other professional extras jockeyed for extra hours to bump them into double overtime, I jumped at the first chance to clock out in hopes of a shower.

Even though I’m invisible in the final product, the visibility that Transparent’s second season will enable for more trans actors, more queer actors, and not to mention behind-the-scenes jobs for people who are often overlooked in the hiring process is priceless. I’ll carry with me the rallying cry from Soloway on the first day of shooting: “We all know the world needs changing. You’re part of the change.”