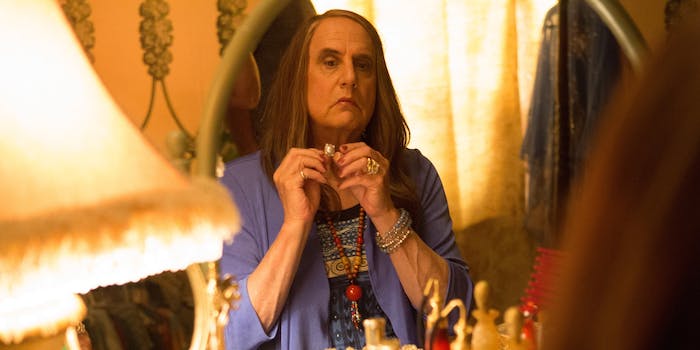 Before even revealing the series’ second season premiere date, Amazon Studios has renewed Jill Soloway’s Transparent for a third season set to debut in 2016 and has set up a deal to get more exclusive work from the showrunner.

Transparent follows the Pfefferman family, played by Jeffrey Tambor, Judith Light, Amy Landecker, Jay Duplass, and Gaby Hoffman, as they find ways to deal with the patriarch’s (Tambor) transition into womanhood. The series was inspired by Soloway’s own experience, as her father came out as a transgender woman several years back.

Amazon renewed the series for season two in October (which should debut sometime in the fall), not long after it premiered on the streaming service on Sept. 26. Since then, Transparent has won a Golden Globe for best comedy series, while Tambor took home a Golden Globe for his portrayal of Mort/Maura Pfefferman in the show.

In addition to the show’s season three renewal, Amazon Studios made a pact with Transparent creator Soloway that will see her newly formed production company develop more content to be produced by Amazon. Also per the deal, Soloway will keep serving as showrunner for Transparent, while Andrea Sperling, previously a co-executive producer on the show, will take on the role of executive producer.

Together Soloway and Sperling will run Soloway’s new production company, which will create content exclusively for Amazon’s video platform. “I am blown away by the creative freedom Amazon gives me, and I can’t wait to reveal where this journey is going to take us,” said Soloway in a statement.

As for the future of Transparent, season three will likely consist of 10 episodes, like seasons one and two. Viewers can also expect an appearance from Caitlyn Jenner, whose story of coming out as a transgender woman was heavily covered in the media, in season two.