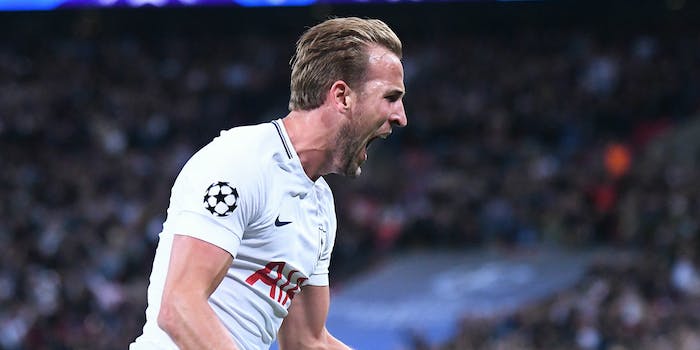 How to watch Tottenham Hotspur vs. Manchester City for free

Even if you’re stuck in a cubicle, it’s easy to watch a Tottenham Hotspur vs. Manchester City live stream, and you can do it for free—and no, you won’t have to visit any shady sites with interrupting pop-ups you have to close every five minutes. English Premier League games are broadcast on NBCSN. Not only does very major live TV streaming service carry NBCSN, but they all also offer one-week free trials, making it pain-free for you to watch Tottenham Hotspur vs. Manchester City online. Here’s everything you need to know.

Tottenham Hotspur vs. Manchester City: Why it matters

When it comes to the soccer elites, Tottenham Hotspur is in an awkward gap between giant-spending clubs like Manchester City and the rest of the English Premier League table. When this Tottenham side meets a big dog it hasn’t been fun recently, with EPL and Champions League losses already to Liverpool, Barcelona, and Inter this season.

Expect the same against Manchester City on Monday, a team that can score at will and is coached by Pep Guardiola, the most influential and best tactician of the modern era. It’ll help that Dele Alli is expected to be healthy enough to return, but it won’t that Jan Vertonghen and Danny Rose are still sidelined with injuries. Tottenham stood pat and made no acquisitions this offseason, and while stars long-rumored to make a move to bigger clubs like Rose and Toby Alderweireld stayed home, the lack of depth is hurting Tottenham because it must plan for two huge games per week. You want to be a big dog, Tottenham; it’s time to stop leaning on academy prospects like Harry Winks for meaningful minutes. —Ramon Ramirez

With the lone exception of some games that stream exclusively on ESPN+, FuboTV has absolutely everything you could ever need for streaming international soccer matches like Tottenham vs. Man City. The service not only comes with NBCSN (and regional NBC Sports channels where available), but you’ll also get NBC Universo, more than 10 BeIn Sports channels, Fox Sports and more. (Here’s the complete FuboTV channels list.)

If you’re looking for an all-encompassing streaming solution, look no further than Hulu with Live TV. Not only do you get a free Hulu with Limited Commercials account, giving you all the on-demand entertainment you could hope for, you get a great selection of sports, news, and entertainment channels to watch live. (Here’s the complete list of Hulu Live TV channels.)

If you keep things simple, Sling TV is the cheapest way to watch English Premier League games online. The Sling Blue package, which costs just $25 per month, comes with NBC Sports (in select markets) and NBCSN. Of course, you can always upgrade to get ESPN or add the Sports Extra pack for even more international soccer. (Here’s a complete guide to Sling TV channels.)

If you plan on splitting your live TV subscription with roommates, YouTube TV is your best. Not only do you get a solid selection of channels, but each subscription lets you create up to six users, each of whom receive unlimited cloud DVR, so you can always record a live stream of Tottenham Hotspur vs. Manchester City and circle back to it later. (You can find the full list of YouTube TV channels here.)

While a little more expensive than its competitors, PlayStation Vue lets you stream on up to five devices at once, which is ideal if you don’t know where you’re going to be from day to day and there are other people who are going to be using your account. (Here are all of PlayStation Vue channels.)

No matter which live streaming service you decide to go with, do yourself a favor and download the NBC Sports app. It’s not just a good backup option for streaming Spurs vs. Man. City. The app will also let you watch live sports from every NBC Sports channel in your streaming package. That may include regional NBC Sports channels, NBCSN, and the Golf Channel.

New to cord-cutting? Here are our picks for the best movie streaming sites of 2018 and free live TV apps and channels. If you’re looking for a specific channel, here’s how to watch HBO, Showtime, Starz, ESPN and ESPN2, AMC, FX, Fox News, MSNBC, CNN, FS1, TBS, TNT, Cartoon Network/Adult Swim, the CW, NBA TV, MTV, the Weather Channel, and NFL RedZone without cable, as well as free movies on YouTube. If you’re on the move, here’s how to watch Fox Sports Go and live stream NBC Sports.