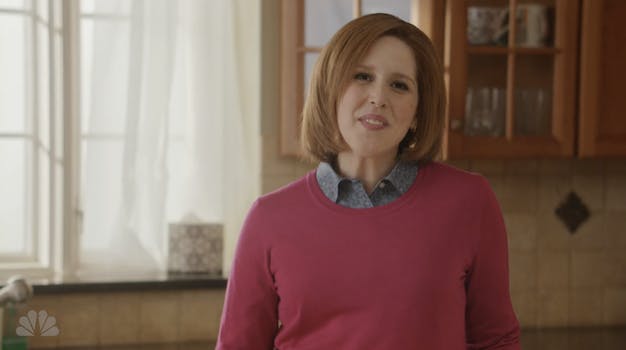 What's a lady to do when she's not feeding her "hungry guys"?

The Super Bowl is rough, amirite, ladies? When we’re not serving our menfolk Buffalo wings and canapes, we’re basically just chilling in the kitchen, watching Gone With the Wind on TNT and waiting for the game to end.

But this year, we no longer have to be stuck behind our IKEA kitchen islands, watching Vivien Leigh turn curtains into a dress yet again. We can play with the Totino’s Super Bowl Activity Pack, for football widows and grown women “ages 5 and up.”

In the sketch, featuring SNL’s Vanessa Bayer as a frustrated housewife and host J.K. Simmons as her loutish husband, the Totino’s Super Bowl Activity Pack for women features “fun little puzzles and games to keep my mind active and busy” while she waits for her “hungry guys” to ask her to deliver more Totino’s Pizza Rolls. The puzzles and games include a spinning top, a word search, a connect-the-dots puzzle, and those little sticky hands you got in Frosted Flakes cereal boxes when you were growing up.

It’s a spot-on parody, particularly in light of all the ads you’ll see during the Super Bowl of those long-suffering wives with glued-on smiles, patiently serving their husbands in front of the TV. So happy Super Bowl Sunday, ladies. Just make sure you don’t think too hard during the word search jumble and hurt your little lady brains.