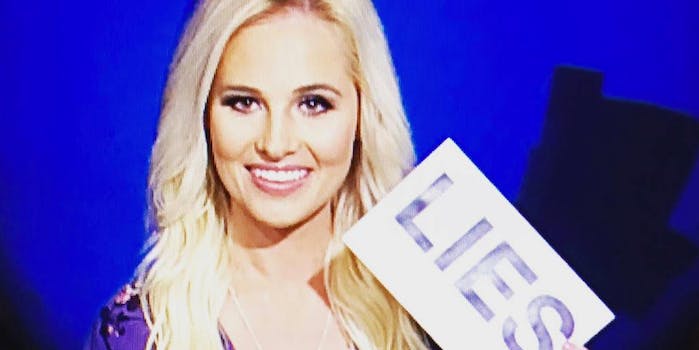 As someone who graduated this month from the second-ranked journalism school in the country, the main lesson I took away from my studies was to present the facts fairly and accurately. Any journalist should know that.

Professors shove the notion down our throats in ethics, law, and reporting courses. We are constantly reminded to never state our political opinions on social media, and to always be fair when covering a person or event. So why did Lahren forget that?

The 24-year-old graduated from the University of Nevada Las Vegas, where according to USA Today, she studied broadcast journalism. She landed her own show out of school on One America News Network, then moved to Dallas last year to host Tomi, a news show that puts a polished and shareable spin on talk radio. Her show may not be fake news, but it does champion fake arguments.

In a recent interview with Trevor Noah, Lahren responded to a comment about Colin Kaepernick‘s national anthem-specific protests.

“A guy is kneeling in the corner, I don’t understand why that offends you so much,” Noah said.

Lahren initially responded with a thoughtful rundown of the situation from her perspective: “I know what that flag means to me. I know what that flag means to those fighting for our country right now,” she said. “It’s bigger than a piece of cloth… If you live in this country, you can want to better it. But to disrespect our flag and our anthem in that way… To get out whatever aggression you have… I disagree with it.”

But her next comment is what turned the conversation into something it was not.

Noah interrupted, saying that no one brought up being white.

This is the same tricky tactic that Lahren uses in many of her videos. She brings up being white quite often as a sign of oppression. She uses it as if she is being attacked for being white, when in reality, no one said anything about it.

In a video about Lil Wayne saying he has never experienced racism, Lahren still found a way to twist and add fire to the flames.

She first criticized the “Black Lives Matter Twitter militia” for labeling Lil Wayne as a coon, Uncle Tom, and threatening to stop purchasing his music. How do you label random people tweeting about their dislike of Lil Wayne as the Black Lives Matter movement? This type of “reporting” gets uneducated viewers upset and stirs hatred. It’s a nonsense comment.

She then went on to say that Lil Wayne thanked all his white fans for coming to his concerts: “Imagine that, he acknowledges that white people can like rap music too, fantastic.”

Who said white people can’t like rap music? No one in the interview with Lil Wayne said that. Lahren pulled that out of thin air to make her followers upset, and think that people are saying white people are not allowed to listen to rap.

She’s also said that racial and societal issues were not leading issues in the United States until Barack Obama was elected president. It’s at best an absurd oversight to overlook America’s history with respect to civil rights; but for someone who follows Lahren closely and gets as riled up as she does, it’s easy to stop thinking logically and only hear what you want when watching her videos. Then they hit the “share” button.

In July, the South Dakota native compared the Black Lives Matter movement to the Ku Klux Klan—instantly minimizing what the KKK does and stands for.

This is why black people dislike Lahren so much, and she’s become a recent target of essays calling out her bias. She poses Black Lives Matter as a terrorist group, and does so deceptively to rile up her audience.

When she’s against something, like protesting the American flag, she never offers a solution. “That’s not the way to go about it,” she says. Lahren is helping to deepen the political divide in America—one she often complains about.

She’s just getting started. Lahren’s good looks, knowledge of politics, and brash opinions have yielded millions of video streams. She is even gaining popularity with New York comedians like Charlamagne tha God and Trevor Noah. Both celebs have been spotted with Lahren outside of the studio, as she transitions from reporter to TV talking head to full-on celebrity.

As a journalist at the starting line of my career, I never want my job compared to what Lahren does. It is damaging and unprofessional. Let’s hope that as her platform gets larger, she will realize the danger her reporting is causing and do better.