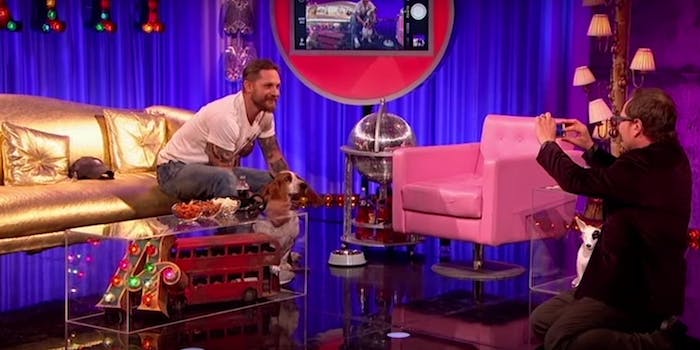 Tom Hardy continues his mission to befriend every dog

Can we just have an entire TV show where Tom Hardy hangs out with dogs?

Tom Hardy‘s love of dogs is well documented—painstakingly so, in the case of the Tom Hardy Holding Dogs Instagram account. If you’re ever feeling low, all you have to do is Google “Tom Hardy dogs” and let the pure adorability flow over you.

It’s with this in mind that British talk-show host Alan Carr knew exactly what to do when Tom Hardy visited his show. He decided to introduce Hardy to some new doggy pals.

The Tom Hardy Holding Dogs page had long been searching for photos of the actor hanging out with a bassett hound and a great dane, so Carr was happy to oblige by bringing both dogs on set. The resulting introductions are just as cute as you’d imagine.