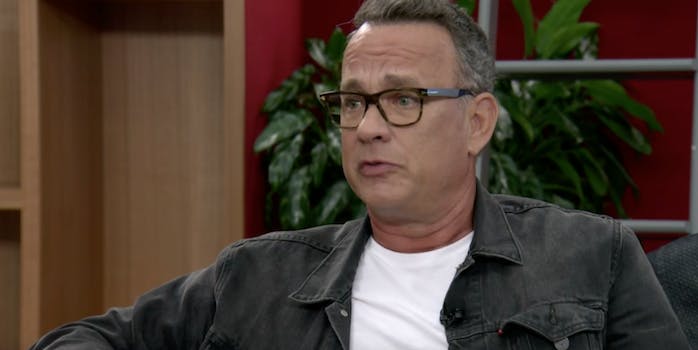 'You know that he's a diabolical genius because he has a beard.'

Tom Hanks delivered a low-key roast to Twitter CEO Jack Dorsey during a panel discussion with his castmates from The Circle Monday.

The movie follows a futuristic startup that uses surveillance technology to help its employees live up to their full potential. Hanks plays a CEO who spews woke-isms like, “I believe in the perfectibility of human beings,” and “When we are our best selves, there isn’t a problem that we cannot solve,” while new employee Emma Watson tries to decide just how invested in the company she should become.

On the panel, which took place in Twitter’s San Francisco office and also featured Watson and Patton Oswalt, Hanks spoke for several minutes about the optimism and unintended potential to malign people that tech tends to generate. He said his ’90s movie You’ve Got Mail, with its AOL-based anonymous flirting, depicted the same “great promise of romance, and happiness, and love at last, and a connection that you couldn’t get any other way” that Twitter provides for people in 2017.

“It’s odd, the technological triumph we’ve all been able to experience has us in that same exact place. Except it happens much, much quicker and it can go around the world. I know even as we are joking now, thousands of people are watching us on this live feed… and that is an absolute magnificent reality no matter what you want to sell—a movie like The Circle that we’re all very proud of, but we could be selling something ridiculously malevolent if we wanted to, and we’d be using this same exact technology.”

Circling back to his character in The Circle, Hanks turns to Dorsey and chuckles, “I played you! I played you.”