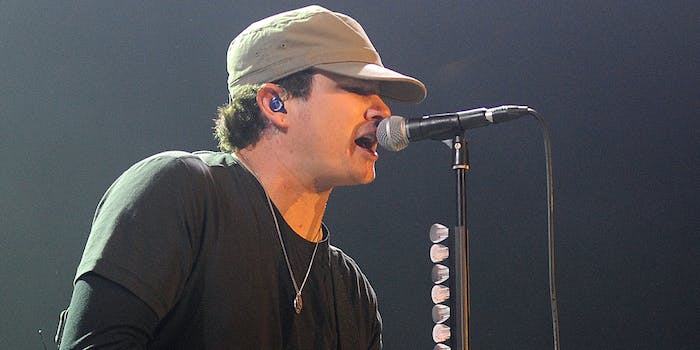 Tom DeLonge says his alien academy is not millions in debt

This is growing up?

Tom DeLonge, former guitarist for Blink-182, is pushing back against a report that claims his entertainment-based alien-seeking organization, To the Stars Academy of Arts and Sciences, is having financial trouble.

According to report from Ars Technica, which provided a filing from the Securities and Exchange Commission, the company has raised about $1 million in fundraising since it began offering stock to potential investors in September 2017. In the “note” section of the report, it states: “The Company has incurred losses from operations and has an accumulated deficit at June 30, 2018 of $37,432,000. These factors raise doubt about the Company’s ability to continue as a going concern.”

DeLonge, who won UFO researcher of the year in 2017, tried to point out that “deficit” doesn’t necessarily mean “debt” (Ars Technica updated the story to reflect that) and attempted some clarification in a now-deleted Instagram post. But first, he asked followers to “go write a complaint” on Ars Technica’s website “for trying to hurt an admirable effort to help humanity by using negative attacks and –> lies.” He continued:

The approximate $37 million stockholders’ deficit is NOT DEBT as he characterized it but is attributable to stock-based compensation expense. IT IS NOT RELATED TO THE OPERATIONAL RESULTS OF THE COMPANY.

In October 2017, DeLonge posted to Facebook claiming that the company “brought together an elite team from CIA, DOD, and the FMR Director of Advanced Programs at Lockheed Martin’s SkunkWorks,” and that it had 769 investors. A video to stir interest claimed the company is “targeting the mysteries of the universe” but its mission was still pretty vague.

The Academy is the entertainment wing of DeLonge’s larger company, To the Stars, and the website now states it has 2,547 investors. According to the company’s mission statement, it “strives to be a powerful vehicle for change by creating a consortium among science, aerospace, and entertainment.” You can also buy DeLonge’s books there.

We’ve reached out to To the Stars for comment.

Last year, DeLonge told Joe Rogan on the comedian’s podcast that he believes life on Mars was annihilated in a nuclear war.