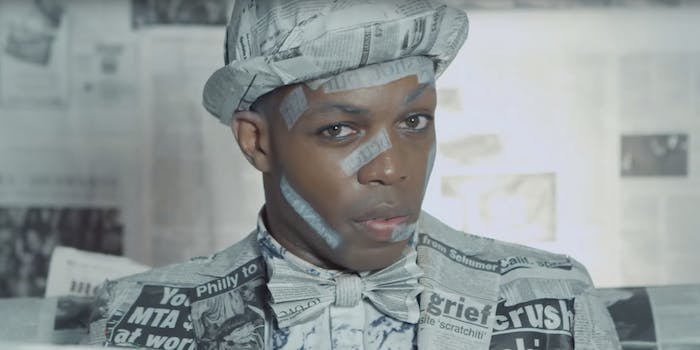 Todrick Hall is willing to break the law to make his dreams come true.

And in the premiere episode of his new MTV series, Todrick, Hall proves it. Shooting on location in Los Angeles, he decides to head outside and film, permits be damned. He tells his crew to keep going no matter what, and when several security guards walk in and tell them to stop filming, the whole cast just keeps dancing through the frame. They have to get the shot, and, for Hall, that’s just par for the course.

“I think that people are just going to be surprised by the creativity that the cast has, how we take nothing and make something out of it,” Hall explained at his bright and candy-filled premiere party at the YouTube Space L.A. “And how we’re not afraid to be adventurous and go out of the box and do crazy things in order to get the views and get the exposure that we need to get our careers to the right place.”

The 30-year-old has been putting himself out there as a performer since 2010, when he made it to the semifinals on American Idol. Since then he’s gone on to Broadway performances and, mainly, YouTube, where Hall has churned out high-production-value, celebrity-heavy music and dance numbers that range from parodies of Disney princesses to Mean Girls. He’s launched successful tours and produced content for Virgin America, and now he’s made the leap to television with a half-hour docuseries for MTV.

“They were fairly hands-off when it came to it,” said Hall, who attended his fashion-forward party in a crown and glitter-covered suit. “[MTV] really trusted us and our team. They didn’t try to incorporate people that were not part of our original family and put them on the show just to meet different quotas or to say ‘we need this character.’”

Each episode revolves around the group producing a single video for Hall’s channel, following the entire process, from Hall working with a music producer to costume shopping and painting sets. In the premiere the group doubles up on projects, producing both a music video for a concept around fame-desperate celebs called “Who Let the Freaks Out,” and, to apologize for making his makeup artist work on her birthday, a birthday song Hall wants to be like the new “Electric Slide,” called “The Birthday Dance Party.”

Hall isn’t the first YouTuber to turn to TV, with creators like Epic Meal Time and Grace Helbig both producing shows for networks. However, Hall’s show is unique in that it doesn’t just lift formulas from YouTube and apply them to television; instead it makes YouTube the center of the narrative.

On TV there are glimpses at the two finished products, but part of the show’s digital integration is to drive viewers to Hall’s YouTube channel with the complete video. In turn, the network is hoping his 1.6 million subscribers will be tuning in Monday nights. For Hall, that speaks to a mutual respect between entertainers, regardless of their platform—be they birthed from TV or from the Web.

“We’re all artists and all trying to claw our way up to the top and leave the biggest mark on this Earth that we can.”

“I think it’s really awesome for all artists to have a mutual respect, instead of us being the Jets vs. the Sharks, not to use a Broadway analogy,” laughed Hall. “I just think it’s really important that every single person just recognize that everyone is working hard and we’re all artists and all trying to claw our way up to the top and leave the biggest mark on this Earth that we can.”

For Hall, in addition to showcasing the talents of his crew, he thinks the show will also inspire other creators.

“The number one question I’m asked as a YouTuber every day is ‘how can I get my videos out there, how can I make my videos go viral?’” Hall explained. “If people watch this show, they’re going to see firsthand, from the beginning of the concept to the concept going on to YouTube, exactly what it takes. I’m hoping that it inspires a lot of artists around the world to change their lives and change their futures.”

As long as he and his crew stay out of trouble with the law—or, at least, with low-level security guards—they’re well on their way.

Todrick airs Mondays at 10pm ET on MTV. The first episode is available on MTV’s website.