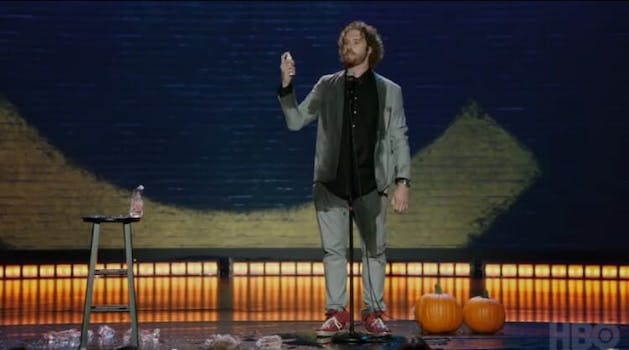 The most interesting thing about Meticulously Ridiculous is something Miller had little control over: The timing of the special’s release. The first thing looming over the special is the recent announcement of Miller’s departure from Silicon Valley. It’s easily his best role to date, so Meticulously Ridiculous serves as a showcase for Miller as a main attraction. Whether that’s fair or not, it’s something I couldn’t shake while watching. That comparison doesn’t do Miller’s standup any favors: On Silicon Valley he has some of the best comedy writers in America feeding him material, and on his own he’s just another famous funny person trying to tell jokes.

I don’t want to sell Miller short as a writer, because he does have some bits that land with punch. One standout run of jokes revolves around the concept of time. The more philosophical and abstract the commentary gets, the funnier and more poignant it becomes. Placed in a special filled with more straightfoward concepts, it’s a welcome aside. Most people will likely remember the battle ax bit most. It’s a lengthy story with Miller walking around with a battle ax, much to his wife’s chagrin. Over the course of the story Miller ends up in front of a police officer, shirtless and holding the ax. The punchline is a quip about white privilege, which is both true and casts an uncomfortable light on the special.

Which brings me to the second issue with the timing of the special. That joke is about a trip to the Mall of America and Miller talks about the Minnesota Police being great. But with chaos surrounding the Minnesota police-involved shooting death of Philando Castile in the news, that extratextual context kills a bit of the momentum on Miller’s most focused and sustained storytelling. He’s a woke comic (watch him talk about women’s roles in society), but the unfortunate coincidence looming over the gag sticks out like a sore thumb.

Miller comes across best in his crowd work. His confidence as a performer is appealing and his ability to riff on the spot is endearing. So when he pulls a crowdmember onstage and has the guy (Derek) call his mom, something hacky in concept turns into a show-defining moment. It also highlights the shortcomings of the other material.

After four years on Silicon Valley you can’t blame Miller for wanting to move on. But Meticulously Ridiculous portends a bumpy transition from ensemble player to lead singer. Fortunately Miller is amusing enough to smooth over the rougher parts, but he may still need strong collaborators to get where he wants to be.