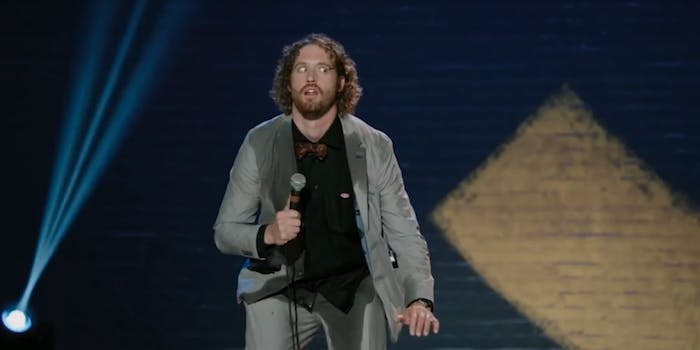 The allegations are mounting up against the former 'Silicon Valley' star.

On Tuesday, the Daily Beast published a report that detailed accusations of physical and sexual assault against T.J. Miller by a former college girlfriend. Since then, more accusations of harassment have emerged.

Adult actress Dana DeArmond said in a series of tweets that Miller and Kong: Skull Island director Jordan Vogt-Roberts harassed her on the set of 2012 Comedy Central show Mash Up, which was written by the two. She claims Vogt-Roberts gave her an unwanted kiss after the show wrapped, but she didn’t specify what Miller did.

I was harassed by both Tj Miller and the director Jordan Vogt-Roberts shooting for Comedy Central’s Mash Up. I’ve been saying Tj was an asshole for years. So there you go.

I wonder if Jordan Vogt-Roberts was a creep to anyone else. After wrapping mash up he invited me for drinks. I thought he was polite when he walked me to my car. He leaned in for a kiss. I said “no thank you” he replied “don’t make this weird” and kissed me anyway

Trans critic Danielle Solzman also relayed an interaction with Miller around the time The Emoji Movie was released. She posted the email in September with names redacted but confirmed it was from Miller on Tuesday. Solzman says she sent Miller an email asking why he uses an offensive transphobic slur in his website description. He responded with an email that included the same transphobic slur. Miller also called her “Daniel” repeatedly, as well as a “weird strange terrible man.”

Solzman told the Daily Dot she’s known Miller since roughly 2006, and that he was “one of the first people I came out to in late 2015.” She also provided screenshots of anonymous texts received after she posted the email in September, which threatened Solzman would be blacklisted or sued.

A lot of people keep asking what I sent to TJ Miller. If you need the context, here's the email that I sent him. I'm including the screenshot of the tweet in which I found out about his use of a transphobic slur in his site's meta description. pic.twitter.com/0Kadh4hflZ

It's safe to say that his career is over now. Nobody ever wants to be on the receiving end of this kind of transphobic abuse. This was the email that found its way to my inbox just one week after the Emoji Movie was released. https://t.co/Nh4T7l0Djf

Also on Tuesday, a woman recounted attending an open mic that Miller showed up to five or six years ago, and she claims that he might have tried to drug her drink.

I've been encouraged to publicly share my story. So if you're ever talking about TJ Miller to me and I exclaim "Fuck that guy" this is why. pic.twitter.com/IgYyN6m2cZ

Comedian Lauren Ashley Bishop recounted how Miller allegedly tried to get her to not go through with a restraining order against an abusive ex because they were friends.

TJ called the night before my restraining order hearing with my abusive stalking ex who was his buddy. he threatened to destroy my career if i went through with it. i won the restraining order anyway. i know this girl. believe her. https://t.co/1GkoNAQIGi

Regarding the college assault accusations, Miller and his wife released a statement of innocence on Tuesday.

Dana DeArmond did not respond to a request for comment.