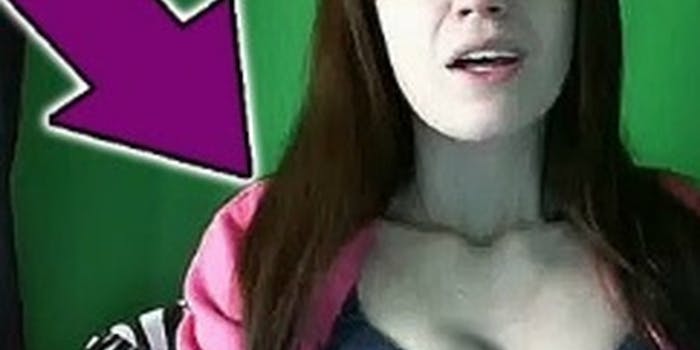 After one YouTuber made a video criticizing one particular reply girl, he found his videos removed—at least temporarily—due to so-called copyright claims.

When Jhoe, who has a personal and video gaming channel on YouTube, jumped into a YouTube battle over so-called “reply girls,” he had no idea that he’d get caught in the middle of a copyright fight.

The reply girl controversy—what the Daily Dot has dubbed tittiepocalypse—in its current incarnation, has spawned accusations of censorship, lessons in copyright, and terminated contracts.

For weeks, YouTubers have been speaking out against the reply girls and their tag manipulation, spamming, and push-up-bra-wearing ways.

Jhoe did what hundreds of YouTubers have done recently before him; a couple of days ago, he uploaded a video opining on the reply girls controversy.

The video, titled “Megan speaks – You Suck,” is rather unsympathetic to the reply girl known as MeganSpeaks. Jhoe calls MeganSpeaks “annoying,” and makes fun of the way she Photoshops her breasts in her thumbnails. In other words, it’s pretty standard fare for an anti-reply-girl video.

The video was shared by Yogscast, and others who agreed with Jhoe’s opinions about the reply girls.

Two days later, Jhoe found that his video had been removed due to a copyright claim under the Digital Millennium Copyright Act, or DMCA, by online behemoth Machinima. Machinima is an online entertainment network with thousands of YouTube partners. It just so happens that  MeganSpeaks is one of those partners.

In an email Jhoe shared with the Daily Dot, Machinima told him they removed his video because he used a thumbnail MeganSpeaks had used, but with altered text over the image.

“You don’t have permission to use that image,” wrote the Machinima representative who responded to Jhoe’s inquiry. “If you change the thumbnail to something that doesn’t have her image or any image from one of her videos, I will be more than happy to retract the strike.”

When word got out that Jhoe’s video was taken down due to a DMCA request related to the thumbnail he used, YouTubers protested by making videos about the controversy, and mirroring the videos, or posting copies to make them harder to take down. At press time, there were roughly a dozen videos related to the Machinima DMCA controversy, with some viewed thousands of times.

YouTuber and Machinima Partner HappyCabbie, who interviewed Jhoe on camera, at the end of one of his videos directed his comments  to Machinima: “You can just revoke my partnership if this is what you’re going to be doing.”

Machinima apparently took him up on his offer. Today, the company informed HappyCabbie that his Machinima partnership will be “terminated” on March 30.

HappyCabbie mentions in his video that thumbnails are in fact fair use, and pointed out that MeganSpeaks had in the past, herself,  used images in her thumbnails that were not in fact hers.

“According to the Machinima Partner Contracts, Machinima does NOT own the copyright to the content uploaded by its partners, the video makers own them,” wrote HappyCabbie in an email to the Daily Dot. “So why is … Machinima filing DMCAs on videos that do not infringe their copyright[?] To me this is an abuse of the DMCA.”

Jhoe, who was eager to get his original video restored rather than filing a counterclaim under the DMCA, gave in and changed his thumbnail. His video was restored within hours.

“I feel the video does more good up then down,” wrote Jhoe in an email. “The cat is out of the bag now so I just did what I could to get it released because … it seems [Machinima is] unaware of the actual laws.”

(Jhoe cited the 2003 case Kelly v. Arriba Soft Corporation, which ruled thumbnails can be used. He also directed me to a link describing current search engine and thumbnail copyright laws.)

“That thumbnail is covered under fair use, ” Jhoe said in a video uploaded to his video gaming channel today.

“I heard about what happen to you in a video on the HappyCabbie’s channel. After I viewed that video I unsubbed from all of the Machinima channels that I was subbed to. Most of their videos, if not all their gaming videos, contain copyrighted material in them. It just seems so two faced of Machinima to go after you when they do the same thing,” wrote crowinblack2008 on Jhoe’s video on the topic.