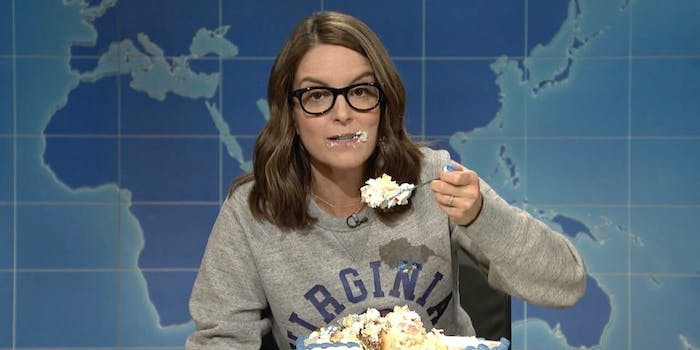 Sorry, there are much more useful things to do.

After the violence in Charlottesville, Virginia and the death of Heather Heyer last weekend, a lot of people have wondered what they can do now. Well, Tina Fey has some advice for what to do when the next rally occurs—something that isn’t sitting well with everyone.

Fey, who’s a University of Virginia alumna, appeared on Saturday Night Live’s latest “Weekend Update” special to talk about Charlottesville. She had fond memories of her alma mater, so she was horrified and heartbroken after seeing what happened on her old college campus. Several more neo-Nazi rallies are scheduled to take place throughout the country this month, so Fey had an idea: Instead of participating in counterprotests, buy a sheet cake and shout everything you really want to say to white supremacists into a bunch of frosting.

Some might find it cathartic. And it might have been for Fey, who called Paul Ryan a coward, described Ann Coulter as “yard sale Barbie,” pointed out that white people stole the U.S. from Native Americans, and mocked Donald Trump and white supremacists as she ate more cake. People felt helpless and hopeless after Charlottesville, and according to Fey, many of her friends have been basically shouting into cake once a week since the 2016 election.

On the other hand, it’s entirely unproductive and a really shitty piece of advice that many don’t have the luxury of taking. As Winona Dimeo-Ediger explained, it’s important that white people use their privilege to stand up and speak up against white supremacy, educate themselves, donate what they can, and continue to do these things. They need to listen to people of color. Tiffany Drayton also notes that it’s also vital to tackle the cycle of systematic racism that still persists in the U.S.

The images that came out of Charlottesville were horrifying, but images of those protesting against white supremacy, such as the protesters surrounding the statue of Robert E. Lee on Friday night or thousands gathering for candlelight vigils for Heyer, are powerful to see.

These are literally young UVA students age 17-23 standing up to a sea of white supremacists and neo-Nazis surrounding them #Charlottesville pic.twitter.com/VEU3mU9d3o