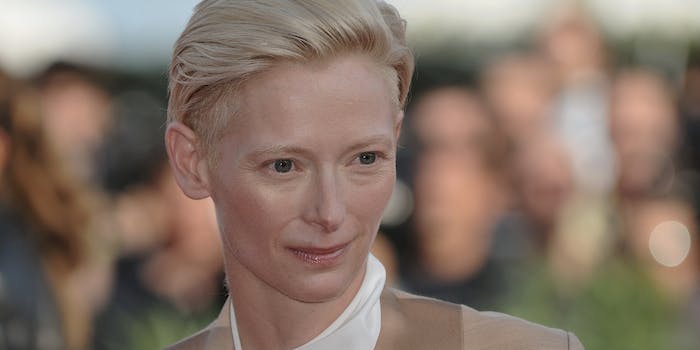 Tilda Swinton opens up on gambling, relationships, and d*ck jokes

Tilda Swinton has taken a brief break from being a Narnian witch-queen and Tom Hiddleston’s immortal vampire lover to answer some fan questions on Reddit.

The actress was online to promote Snowpiercer, a post-apocalyptic movie she made with Chris Evans and Korean director Bong Joon-Ho. Because we have never actually met Tilda Swinton in person, we like to imagine that she is just like the @NotTildaSwinton Twitter account in real life.

I have named every one of my hairs, and tie strands together so they may converse. At night, the din of their chatter is almost unbearable.

In addition to questions about her career (“if you mean would I ever play another cross-dressing, gender transitioning, four hundred year old English aristocrat again, I feel like saying it’s not likely, as those stories aren’t told so often…”), Swinton also showed her fun side, talking about ruining takes on Benjamin Button by making dick jokes with Brad Pitt while David Fincher was looking the other way.

Also, she loves Amy Schumer because “comedy = lifeblood,” and her second career choice after acting would be “professional gambler.”

Yes, if you refer to Tilda Swinton as “yo, girl,” it turns out that she will answer you.

She also addressed the rumor that she was in a polyamorous relationship with her former partner John Byrne and her current boyfriend, saying, “This is not true… it never was.. someone once ran with a misunderstanding.. I suppose there may be people out there who believe it, though, so their perception would be skewed.. I’m sorry if this is a disappointment for anybody.”

In other words, despite giving every appearance of being some kind of immortal forest elf, Tilda Swinton is surprisingly normal. She even goes on Reddit, just like the rest of us. It’s just that once she goes offline again, her day job can be described thusly: “Working with both Jim Jarmusch and Wes Anderson is like the summer camp of dreams.”