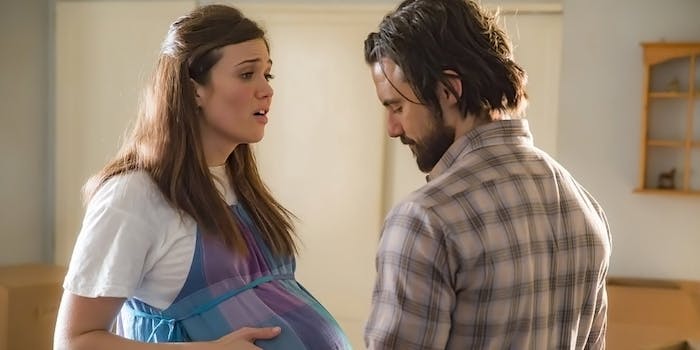 Why does ‘This Is Us’ think it’s OK for the men to be so creepy?

The program has a bad case of Nice Guy Syndrome.

This story contains spoilers for This Is Us.

The first season of NBC’s breakout dramedy This Is Us reaches its inevitably tearful conclusion on Tuesday night as viewers learn how Pearson family patriarch Jack (Milo Ventimiglia) died. The reveal was teased in last week’s installment, in which Kate (Chrissy Metz) confesses to her newly minted fianceé, Toby (Chris Sullivan), that she feels responsible for her father’s death.

It’s a fitting end to one of television’s most emotionally rich and rewarding shows, as complex as it is frequently poignant. This Is Us explores the relationships between three siblings born on the same day: twins Kate and Kevin (Justin Hartley) and their adopted brother, Randall (Sterling K. Brown). Their loving parents, Jack and Rebecca (Mandy Moore), attempt to raise their three children the best way they know how, despite numerous bumps along the way. Created by Dan Fogelman (The Neighbors), This Is Us separates itself from your average family drama by virtue of its immense empathy. Even when its characters are behaving in ways that frustrate viewer expectations, the show understands their perspectives and wants. This Is Us knows that it’s our flaws, as well as our best selves, that make us human.

In the show’s 12th episode, “The Big Day,” This Is Us draws attention to its characters’ inner lives in particularly meta fashion. A walk-on character references Ordinary People, the Oscar-winning drama in which Mary Tyler Moore was cast against her plucky heroine type. “It was really moving to see Mary play such a complicated mother,” the character says. “You don’t see that often.”

That’s an overt nod to Rebecca, a mother perched somewhere on the spectrum between Betty Draper and June Cleaver. When Randall’s birth father (Ron Cephas Jones), who gave him up as a boy, asks to reenter his life, Rebecca is scared he will take the boy away. She refuses to allow his father to have a relationship with him, and when teenaged Randall asks, Rebecca says that she doesn’t know who his biological dad is. But his mother isn’t a bad parent. Rebecca is young, afraid, and still figuring things out. And when Randall later finds out that his biological father is bisexual, This Is Us doesn’t skirt his discomfort with his dad’s sexuality. As in real life, our feelings don’t easily resolve in time for the credits to roll. It’s a process.

But as nuanced as This Is Us can be, the show doesn’t treat all of its relationships with the same depth. The program has a bad case of Nice Guy Syndrome—in which its male characters are viewed as entitled to the women around them so long as they express their love in grand romantic gestures, no matter how twisted those affections are. If the ex who wrecked your marriage a decade earlier by cheating on you, for instance, shows up on your door unannounced, This Is Us believes your objection is merely a roadblock to your happiness.

Kevin, a failed sitcom actor, is the show’s least interesting character. After having a nervous breakdown on the set of his hit show, The Manny, he starts over on Broadway. Kevin lucks his way into starring as the lead in a production that may as well be titled The Long Day’s Journey Into Cheekbones. The show’s director gives the handsome stud the job because he believes “The Manny” will sell tickets. Kevin, however, quickly burns bridges at his new gig—sleeping with both his co-star (Janet Montgomery) and the playwright (Milana Vayntrub). After alienating both women, the actor drops in on his childhood love, from whom he has been estranged for over a decade. Kevin has spent the intervening years spying on her through a fake Facebook profile he set up. (This is supposed to be cute?)

The character’s most prominent trait can best be described as Hot Guy Privilege. Like Jon Hamm’s handsome but clueless doctor in 30 Rock, Kevin lives in a bubble that insulates him from how he affects others. When they were growing up, Randall laments that his brother treated him “like a dog” in a heart-wrenching scene. “I kept coming again and again, just hoping for a scrap from you, like a crumb of affection, of kindness or respect,” his brother says.

Every character in This Is Us has a key flaw that defines them, and the show inches them toward growth. Randall is a proud workaholic. Even Jack, while seemingly The Perfect Dad, has a problem with jealousy. When he learns that his wife had a brief fling with her bandmate (Sam Trammell) years ago, Jack refuses to let Rebecca go on tour with him. Kevin might rebound with a big Broadway success (he even gets a call from Ron Howard!), but it’s doubtful he learns much. When Kevin rings the doorbell of his ex, Sophie (Alexandra Breckenridge), he doesn’t atone for the damage he caused. Following a big speech about how much Kevin misses her, he simply asks his wife to come back to him—as if reconciliation were a doorbell ring away.

It’s borderline insulting to believe that a happy, successful woman will give up her entire life at the drop of a hat. Sophie is a nurse at a hospital, and by her own admission, one of the best physicians there. After a string of not-nice boyfriends, Sophie is in a stable relationship with a good man. But following a handful of scenes, she drops her beau for a second chance with a man who couldn’t think to call ahead.

This Is Us thinks that there’s no problem that can’t be solved by worn-out romantic comedy tropes. Love Actually, a supercut of every tired romcom cliché known to man, is filled with guys showing up on your doorstep to confess their love to you via posterboard or rushing to the airport to proclaim his love just as your flight is leaving. Toby, who Kate meets at an Overeaters Anonymous support group, has clearly been watching a lot of these movies and taking notes. Like John Cusack, he’s a sarcastic class clown who uses humor to deflect his emotions. Toby is the type of dude will also stand outside your window blaring “In Your Eyes” from a boombox, even if you absolutely fucking hate Peter Gabriel. (You do.)

Toby is certainly charming and sweet. He also continually violates Kate’s boundaries over her protests. In real life, planning a party for one’s girlfriend even though she repeatedly tells him she wants Me Time would get a guy dumped. This Is Us seems to believe that it makes Toby eligible for Boyfriend of the Year.

Kate, who grew up in Pittsburgh, is a Steelers diehard. After going out on a few dates, Toby suggests that the two of them watch Sunday’s game together; he’s not a sports fan, but if she likes football, so does he. Kate, though, declines his offer. Watching the Black and Gold is something she does alone, she says. Toby forces her to come over to his apartment anyway, not realizing that the reason for the ritual is that the Steelers were her dad’s favorite team. The two end up watching the game together, chaperoned by her father’s ashes.

This should be a sign that Toby needs to develop better listening skills and respect Kate’s need for space. Instead the writers portray the moment as touching: Kate is being pushed to move on.

Kate’s personal development, though, is rarely on her own terms, and This Is Us tends to place the blame on her for resisting growth in a way it doesn’t with the other characters. There’s a great scene where Randall’s wife, Beth (Susan Kelechi Watson), learns that Rebecca knew the identity of his biological father for years and kept it a secret; she immediately demands that his adoptive mother tell him the truth. But these women each make what they feel is the best choice for in the moment. Rebecca feels that secrecy will protect her son and keep her family together. Beth thinks that only honesty will rectify the situation, even if she has to issue an ultimatum to bring the truth to light. Neither party is completely right or wrong.

Let’s contrast that scene with one where Toby shows up (unannounced, again) to the immersive fat camp Kate signs up for. When Kate gets upset that he drops in without warning, Toby lectures her that he’s felt lonely and abandoned. She left days after he suffered a heart attack. That is  valid complaint on his part, but at no point is Kate’s need for communication and consent respected. To ask your partner to give you a heads’ up if they are going to show up somewhere they weren’t invited is far from an absurd request.

But does Toby tell Kate he’s sorry? Nope. Kate apologizes to him.

Toby does this to Kate repeatedly, and This Is Us expects that its viewers will find his unwillingness to take no for an answer (or even ask in the first place) endearing. When Kate, who has a lovely singing voice, confesses that she’s nervous about singing in public, her boyfriend surprises her by signing her up to sing karaoke at an old folks’ home. After Kate breaks up with him for refusing to lose weight—even though dieting together was a condition of their relationship—Toby shows up at her family’s Thanksgiving anyway.

This behavior is precious and charming on television, but imagine this happened to you in real life. You’ve dumped a guy you’ve made perfectly clear that don’t want to be with, and he flies 3,000 miles to travel to your parents’ house. You haven’t introduced him to your parents, and you didn’t tell him to come. Or let’s say that your ex-husband—who, once again, has been catfishing you ever since the two of you broke up—tells you to leave your boyfriend for him. He’s recently broken up with two different women and claims that he moved across the country to be with you. Your ex appears to be emotional and unstable.

Would you accept these tokens of affection, or would you file a restraining order? Chances are the latter.

This Is Us isn’t a bad show, and at times, it is even a great one. While its social media team plays up its tearjerker qualities, there are far more powerful — and much smaller — revelations quite unlike anything I’ve ever seen on television. As Randall gets older, Rebecca and Jack realize how much they don’t know about raising a black child. Does he need sunscreen? How should he cut his hair? What can they do to help him get in touch with his identity as a man of color in a country that views boys like him as less than deserving of humanity? This Is Us nails the gulf of understanding between adoptive parents and their children, as well as the difficulty of being a parent at all. Love takes work, and it’s a constant struggle.

But for all its enormous strengths, This Is Us has got to stop gaslighting its female characters, treating them as crazy just because they’re uncomfortable with some dude thinking a heartfelt speech entitles him to do whatever he likes. Men who do that aren’t “nice guys,” and they don’t deserve to be on a show as good as this one.