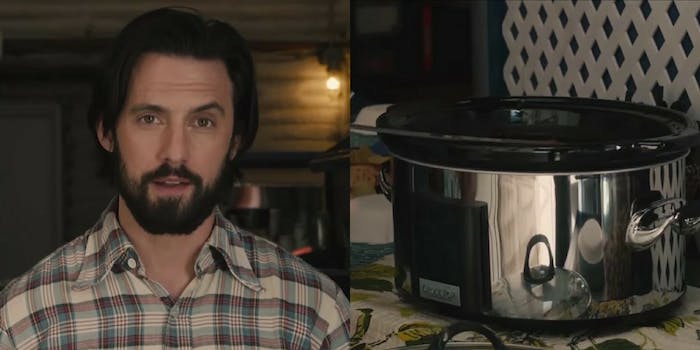 Milo Ventimiglia wants fans to let up on the heat against Crock-Pot.

This Super Bowl Sunday, This Is Us star Milo Ventimiglia wants families to come together, find the “ability to forgive,” and remember there’s “no difference so great that we can’t overcome it.”

You know, like the current rift between This Is Us fans and Crock-Pot after (spoiler alert) last week’s episode revealed that Ventimiglia’s character Jack dies in a fire started by a malfunctioning “slow cooker” on the night after 1998’s Super Bowl Sunday.

After the episode, which fans had waited two long seasons for, the slow cooker manufacturer released a statement explaining all the technology that goes into ensuring that your slow cooker won’t actually kill you. Even Dan Fogelman, the show’s creator, urged viewers not to get carried away by a fictional series.

But it seems the show isn’t done covering for Crock-Pot’s non-issue.

In a new promo, This Is Us and Ventimiglia, clearly monologuing as a Jack, deliver an impassioned plea for friends and family to bridge their differences and find common ground. At the end of the promo, Ventimiglia reaches for something at the end of the craft services table—a bowl. The camera pans as he removes the lid from what’s shockingly revealed to be a Crock-Pot slow cooker and then scoops a ladle of chili.

Of course, the promo ends with Crock-Pot’s logo, along with the hashtag #CrockPotIsInnocent.

Some fans, however, weren’t ready for the Crock-Pot trutherism.

“CROCK POT IS NOT INNOCENT!! Stop telling those lies,” one YouTube user commented.

“The audacity to show a crockpot…” another added.

Even Susan Kelechi Watson, the actress who plays Beth Pearson on the show, tried to rally supporters.

Alas, they’re not having it.

Forget the Super Bowl—lambasting the show for asking to forgive Crock-Pot, or even the writers who killed Jack with a Crock-Pot, will be this weekend’s big event, if the fans had any say.

You can’t make us forgive you @NBCThisisUs for killing Jack with a Crockpot. It won’t happen. Crockpot may be innocent but the writers are not. #crockpotisinnocent #thisisus pic.twitter.com/9pugYQWMxW

Watch the full This Is Us promo below: