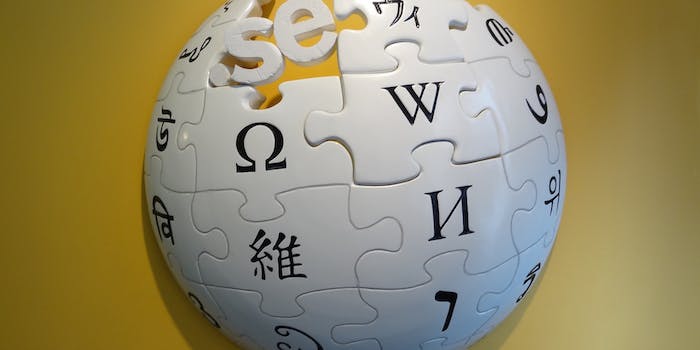 New webseries reveals the hilarious ‘Things You Learn on Wikipedia’

If you’ve spent serious time on Wikipedia, you’ve probably noticed that one of its biggest advantages over traditional encyclopedias is its allowance for the downright silly and absurd. Like the fictional Hitchhiker’s Guide to the Galaxy, anything that can be cited is likely to remain a part of the permanent record, no matter how inane the subject.

This is probably why Wikipedia, like the Hitchhiker’s Guide, is so wildly successful. Many of the greatest items of interest in our world are ones that could be considered, in an academic sense, quite stupid.

Yet sometimes the stupidest subject matter makes the funniest entertainment. This is the thinking behind a new webseries, The Things You Learn on Wikipedia, that premiered last Monday. The show, produced by the Levity Department, combines Wikipedia’s oddest pages with 82-year-old actor and reality TV star Arthur Albert.

“Arthur is reading the text directly,” says producer Richard Hine. “It’s a little bit of a satire on Wikipedia and the Internet, and it’s also a little bit of a fun, lighthearted way to make people think about some of the less important issues of the world.”

Hine met Albert when he helped him produce Arthur Flies a Kite, in which Albert flies a Castakite with MasterChef Junior champion Alexander Weiss. Albert had previously starred on TV Land’s Forever Young, a reality show that mixed five 70-somethings with five 20-somethings, which led to him developing a keen interest in social media and the Internet in general.

“His grappling with technology became a part of the theme of the show,” says Hine. “He has a very fun attitude toward technology, a very interested attitude, so we were kind of brainstorming about what else we could do.”

The two decided that Wikipedia was the perfect place to situation Albert’s brand of humor. But the entries couldn’t merely be funny; they also needed to be informative and interesting (as well as PG in nature). The premiere episode, Toilet Paper Orientation, demonstrates the series’ sweet spot. In true Wikipedia-entry fashion, the episode covers both the “over” and “under” toilet paper orientations with diagrams, pros and cons, the history of the debate, and detailed statistics.

“When people talk about toilet paper orientation, everyone does seem to have an opinion,” says Hine. “People can get passionate about it.” Twitter confirms this to be true.

Over or under: How does the toilet paper spin in your house? Vote: https://t.co/HEb0CIHRvF

I have discovered the most important question one must ask a prospective spouse: toilet paper, under or over? @Harley1424

when u like ur toilet paper to go over the roll, but someone keeps changing it to under. https://t.co/6CluErwzfN

Each episode will pair Arthur Albert’s voiceover work with animator Allen Spector’s motion graphics, based on material taken straight from the Wikipedia pages themselves. Six episodes are currently being produced; they’ll be released over the next two to three months. While Hine won’t say which articles are getting the Things You Learn on Wikipedia treatment, he’s confident they won’t disappoint.

“The topics we ended up with were the result of the journey that we started with,” says Hine, “clicking from one article to the another until we found one that seemed right for [Arthur] to read.”

In the meantime, to embark on a journey of your own, try heading to Wikipedia’s list of unusual articles, and remember: Don’t Panic.