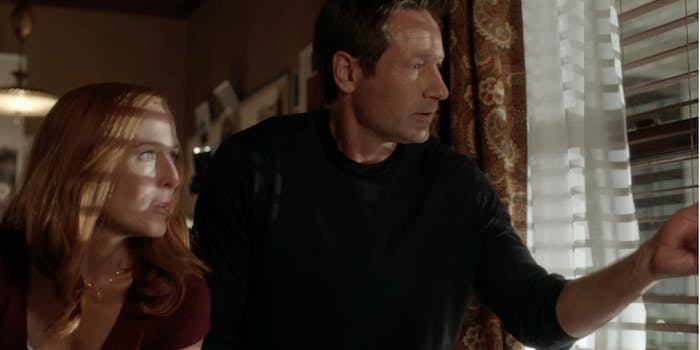 Do you remember your first time?

The X-Files debuted 25 years ago today, and one of its taglines, “The truth is out there,” is even more relevant now.

The show followed the paranormal investigations of FBI agents Mulder (David Duchovny) and Scully (Gillian Anderson), and over the next decade their scientist (Scully) versus conspiracist (Mulder) dynamic created a new kind of TV archetype, one that drew in a devoted fanbase. It also had a real-world effect on its female fans, many of whom cited Scully as inspiration for getting into careers in STEM (science, technology, engineering, and mathematics).

In 2016 the show was revamped for Fox, but it never quite felt the same. As Kelly Connolly wrote in The Atlantic: “Mulder and Scully came of age as counterarguments to ’90s complacency. It was never clear where they fit once paranoia went mainstream.”

Duchovny tweeted out a thank you to fans on Monday, though there was no red Speedo GIF.

Thank you to all the fans for 25 years of support! #Xfiles25 pic.twitter.com/mqE8rIBIc6

And X-Files fans shared their favorite GIFs and screengrabs from the show.

My Twitter profile background picture remains the same for a reason. C'mere, @thexfiles ! Here's a big 25th birthday hug. Thanks for being one of the greatest shows of all time. For making me want to write for TV. And for being my favorite for so long. #TheXFiles pic.twitter.com/bBLt0DBkRL

All seasons are now on Hulu.