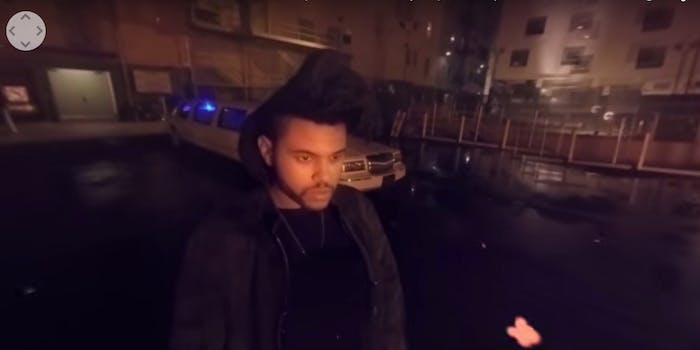 The Weeknd’s new video for the remix of “The Hills” featuring Eminem was shot for virtual reality on a GoPro, and the YouTube version lets you play around with a click-and-drag 360-degree experience of the set while you watch.

Since the song’s original video featured a low-key, cinematic car explosion, this remix did what any good sequel does with a bunch of bigger, wilder explosions.

Since it’s just for Eminem’s verse in the remix, the video isn’t full-length, but it is an indicator that artists are willing to play around with these new features as YouTube rolls them out.

Pro tip: If you watch the video in Chrome, all the click-and-drag, 360-degree interactive components will work, but if you’re watching in another browser it will only play in a fisheye, panoramic view.