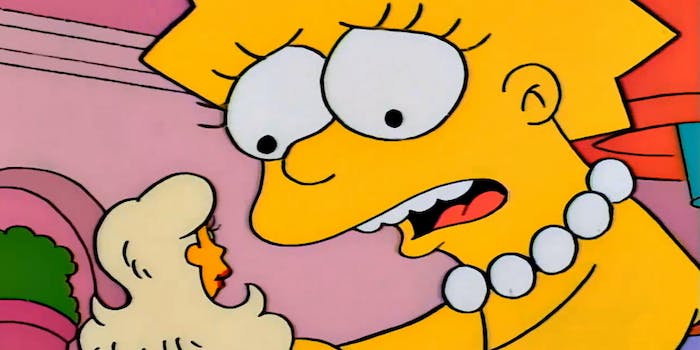 ‘The Simpsons’ predicted its own bad response to the Apu controversy

The Simpsons made a “don’t have a cow, man” joke on Sunday in response to criticism that its beloved Apu character was burdened with negative and mean stereotypes about South Asians. In other words, it was an out-of-touch institutional response to a growing concern that arrived with blinders on and missed the point altogether. For longtime fans of the show, that move seems awfully familiar.

Twitter users have pointed out that the Apu controversy is basically that time Lisa wanted a less-patronizing Malibu Stacy doll for young girls. In 1994’s “Lisa vs. Malibu Stacy,” Lisa fights for institutional change by pointing out that the popular, Barbie-esque Malibu Stacy doll is stuck in 1950s gender roles that emphasize homemaking. In the end, the toy manufacturers she protests respond by releasing a new Malibu Stacy: It’s the same doll, but this time she comes with a new hat.

The episode isn’t just that Lisa’s idea of Malibu Stacy doesn’t line up with the canon, her angry is because she understands how dangerous bad representation, especially representation aimed at children, can be! pic.twitter.com/PdJryn9H3X

Taking one of the most memorable lines of the show, illustrator Edmund Iffland offered a poignant reminder that using Lisa, the show’s perennial conscience, as a vessel to write off Apu concerns from activists like filmmaker Hari Kondabolu was a tough pill for fans to swallow.

Former Simpsons writer and season 3-8 showrunner Josh Weinstein tweeted an old version of the script as the conversation ballooned on Twitter.

Here's part of the Malibu Stacy informational film from "Lisa vs. Malibu Stacy" we cut for time (from the table draft I used in the room.) pic.twitter.com/d342Hmscax

During its run, The Simpsons has eerily predicted President Donald Trump, the St. Louis Cardinals scandal, Disney purchasing Fox, most hit movies, and even Lady Gaga at the Super Bowl. The bizarro phenomenon The Simpsons predicted this time, though, is not an actual tone-deaf Barbie; it’s a biting American original that’s been on the air for 29 seasons.

Just now occured to me the Simpsons literally did "no, it is the children who are wrong" about themselves and didn't even realize it https://t.co/YoNrZG6Up2

Add its missing-the-point reaction to Apu onto the pile.