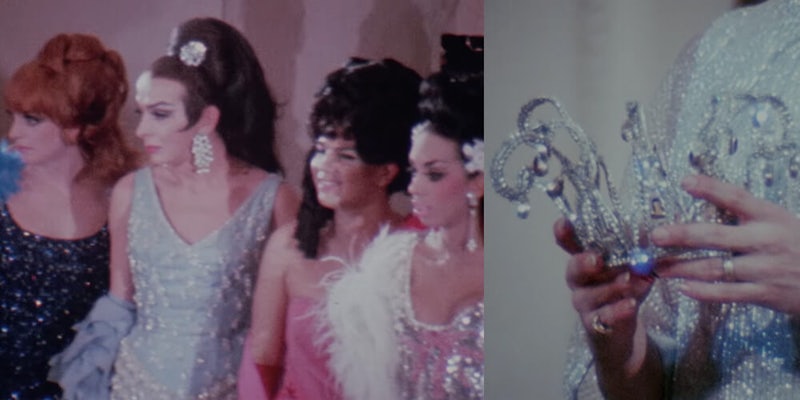 The documentary gave an unprecedented look into 1960s drag culture.

A somewhat lost but never forgotten pivotal piece of historical drag queen media has been restored and made available on Netflix.

The Queen is a 1968 documentary about the previous year’s Miss All-America Camp Beauty Pageant, a competition for drag queens. The film was groundbreaking for its honest depiction of drag queens in the moments between the pageantry. Even in the far less accepting America of the late ‘60s, it received some positive reviews from outlets like the New York Times after premiering at the Cannes Film Festival.

But like many niche films from decades ago, it hasn’t been readily available for the masses. So while it likely paved the way for so much of future drag culture, from RuPaul to ballroom houses, its gone unseen by many.

Netflix tweeted on Thursday that the iconic documentary had finally been restored, color corrected, and released on the streaming platform.

The announcement came alongside a series of tweets sharing the fascinating history of The Queen, with a short dive into why it holds such an important place in LGBTQ history.

“Before RuPaul launched the careers of over 100 drag queens and Elektra Wintour read the ballroom houses of POSE to ashes, THE QUEEN, a 1968 documentary about a 1967 drag pageant, debuted at the Cannes Film Festival providing an almost unprecedented look at queer culture,” the Netflix thread began.

Before RuPaul launched the careers of over 100 drag queens and Elektra Wintour read the ballroom houses of POSE to ashes, THE QUEEN, a 1968 documentary about a 1967 drag pageant, debuted at the Cannes Film Festival providing an almost unprecedented look at queer culture. (thread) pic.twitter.com/CGpABwfYBN

But in addition to the successes of Sabrina, buried within the doc is the inciting incident that led to the house-ballroom scene, where the art of voguing would emerge.

These two things make THE QUEEN, which until now has never been streamable, an indelible part of queer history

Netflix’s Twitter account points out that one of the big reasons The Queen is so important is because it shows people living their truth in a time when they were more ostracized for it than most of us can remember.

“This was a time before the pivotal Stonewall Uprising, a time where drag was often still criminalized–Sabrina was reportedly arrested over 100 times for crossdressing,” one tweet reads, referencing the pageant’s mistress of ceremonies, Miss Flawless Sabrina.

On its surface, this cinéma vérité-style documentary is a chronicling of the Andy Warhol-judged 1967 Miss All-America Camp Beauty Contest. For that event, 28 drag performers converged on Manhattan. But as a part of the process, the film provides insight into the LGBTQ+ community. pic.twitter.com/pjec0ZfNxR

In a particularly heartbreaking look into the discrimination that these men faced in their time, the tweets feature a video in which the contestants, outside of drag makeup and costume, share stories about the army turning away either them or their friends for being visibly gay.

In this way, THE QUEEN is almost unprecedented, allowing drag queens to speak in a forum that did not judge, mock, or criticize them. In fact, if criticisms were lobbed at anyone, it is the viewer that is in the hot seat.

But what The Queen is most known for is, as Netflix writes, the “epic reading session by Crystal LaBeija” captured on film. When LaBeija failed to win the crown, which she, likely accurately, perceived to be due to racism and favoritism, she left the stage and later gave a verbal lashing to the camera and then to Miss Flawless Sabrina for the choices the pageant made.

LaBeija was the reigning Miss Manhattan at the time, and one of only a few Black queens who had ever won Queen of the Ball, a prestigious title. At the time, queens of color were routinely short shrifted, snubbed in favor of their white counterparts. pic.twitter.com/a6WI8e1u7J

“She walks offstage, in the middle of the awards, never to walk another pageant in the white-centric circuit again,” Netflix writes.

As the final scene of the film — and of that segment of Crystal’s drag career — she lets loose a blistering read, first to the camera, and then to Miss Flawless Sabrina herself. It’s a sight to behold. pic.twitter.com/NsgwIx1FWO

This moment has been referenced by current LGBTQ media again and again. It also ultimately led to LaBeija breaking off and doing her own thing, which in turn led to the creation of “houses” in ballroom, as well as voguing.

The format of "houses" hosting balls quickly was replicated, and these groups, which were almost exclusively Black at the time, began to form, becoming surrogate families for members.

The art of voguing would be created and nurtured in these families.

Since that 1991 work, the scene has grown into an international, bustling community with over 50 houses. Though POSE shows a fictionalized narrative set in the 80s and 90s, other shows like My House and YouTube channels like Ballroom Throwbacks show the scene today. pic.twitter.com/bDgcBLTMFb

The result: THE QUEEN is an inextricable part of queer history, preserving Flawless Sabrina, who was the RuPaul of her time, as well as the moment that the ballroom community began to split off and become something all its own.

The Queen is now available to stream on Netflix in the U.S., the U.K., Canada, and Australia after being restored by Kino Lorber and the Harry Ransom Center at the University of Texas.