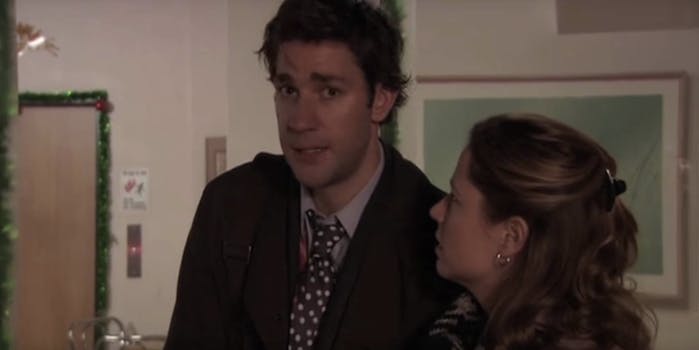 Screengrab via The Office Stare Machine/YouTube

Every human emotion, as portrayed by characters on ‘The Office’

This is not a mandatory meeting, but if you love 'The Office,' it is.

Over the course of The Office’s nine-season run, the characters at Dunder Mifflin showcased a wide range of emotions. The mockumentary sitcom explored everything from prank wars to heartbreak, giving the series’ actors plenty of opportunities to show off their range. Throughout the series, you could witness the complete breadth of human emotions, which is why one loyal viewer has created an emotion machine using clips from the show.

The Office Stare Machine was created by Joe Sabia, who spent a year and a half finding every single instance of when characters would break the fourth wall and stare into the camera. By collecting and cataloging all 706 stares, Sabia was able to create a machine that allows you to search the fourth-wall-breaking stares by emotion. Want to see when everyone was distraught? Good news. Want to see pure joy? Got you covered.

Fans of the show won’t be surprised to learn that Michael Scott has the happiest expressions while Jim Halpert leads the way when it comes to sadness and despair. It’s a fascinating historical record of a creative device that accidentally became a catalog of human reactions.

Is this a goofy project? Yes. Is it worth your time? Absolutely. Just be aware, there are some spoilers in these expressions. You may want to finish your reruns first if you haven’t resolved any storylines.

If the joyful clips aren’t bringing you enough glee IRL, try the Office Time Machine on for size: The sister site has collected all 1,300-plus cultural references from the show in a similarly searchable archive.