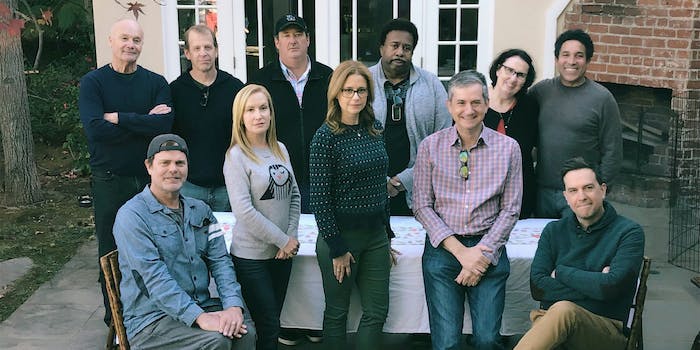 Jenna Fischer teased she will see the rest of the cast 'soon.'

It’s been half a decade since NBC’s The Office premiered its series finale, and a cast reunion photo has Twitter wondering whether a reboot is on the way.

The reunion quickly went viral after both Angela Kinsey and Jenna Fischer posted photos on Twitter, including an attempt to recreate a Christmas photo featuring the entire cast.

“Some of the old gang got together today… it was so great to see everyone!” Kinsey tweeted. “I turned to Ed and said, ‘I feel like we are at a family reunion.’ He smiled and said, ‘We are.'”

I had brunch with these oddballs today. Love you #officemates #theoffice pic.twitter.com/UWnkOaU1p3

We were attempting to recreate this photo :) Happy Holidays! We missed you Steve, Ellie, John, BJ, Mindy, Craig and Kate! We will see you soon! pic.twitter.com/P1kvaxn8FS

But Fischer’s tweet in particular raised eyebrows. After posting the original Office Christmas photo, Fischer gave a shout out to the cast members missing from the reunion—including Steve Carell—and said “We will see you soon!”

“We will see you soon” pic.twitter.com/GSoe4BMlXa

Others were just happy to see a huge portion of the cast back together, even if Steve Carell, Craig Robinson, John Krasinski were missing.

Darryl and Jim definitely snuck away to Poor Richard’s pic.twitter.com/8gd2j6RhNX

Me right now after seeing them together after a long time. pic.twitter.com/J5OfkU90Rr

No matter what’s going on with The Office, everyone can agree on one thing: Toby shouldn’t be there. He’s not part of the Office family.

As for whether a reboot for The Office is on the way, NBC was reportedly “in talks” last year to bring back the series, according to Entertainment Weekly. If so, the revival would star some original cast members as well as newcomers to the series, although Carell would reportedly be missing.

That said, Helms, Fischer, and Ellie Kemper joined Carell for his recent Saturday Night Live monologue, begging him to join an Office reboot for “that money.” While fans continue to wonder what’s in store next, the show’s cast isn’t afraid to come together again informally—even if it isn’t for a remake.