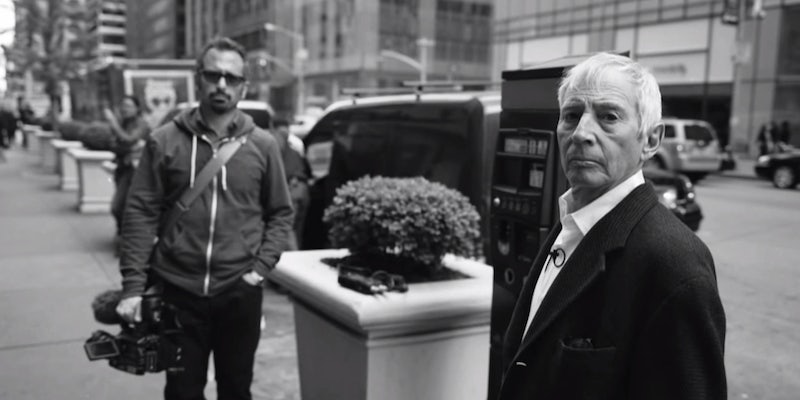 The finale is even more shocking than the arrest.

The HBO true crime series The Jinx: The Life and Deaths of Robert Durst ended Sunday night with an even bigger revelation than the real-life arrest of Robert Durst.

In the finale, director Andrew Jarecki finally got to sit down with Durst to ask him about the similarities between a letter received by Susan Berman (whose 2000 murder he is now being charged for) before she died and a letter sent to the Beverly Hills Police Department after her death. He admitted to writing the letter to Berman but not the letter to the police despite the unmistakable similarities; when looking at the letters side-by-side, he couldn’t tell Jarecki which one he didn’t write.

But it was what happened after the interview with Durst ended that stunned everyone. With his mic still on, Durst went to the bathroom, where he seemed to be talking to himself; he apparently doesn’t notice that the mic was still recording, something that also occurred in an earlier episode.

“There it is,” he said. “You’re caught. You’re right, of course. But you can’t imagine. Arrest him. I don’t know what’s in the house. Oh, I want this. What a disaster. He was right. I was wrong. And the burping. I’m having difficulty with the question. What the hell did I do? Killed them all, of course.”

A New York Times article that published right after the finale says that “more than two years passed” after Jarecki’s interview with Durst before the filmmakers discovered the audio.

However, fans and reporters were suspicious about The Jinx’s timeline. If Durst’s final interview took place in fall 2013 as some believed, then the New York Times’ quote about “more than two years” would be impossible. It’d be a year and a half at most.

Mathletes, help! How could that Durst audio, which must have been from fall 2013, have been found two years later? http://t.co/9nFNLNeFI2

A New York Times review of The Jinx finale offers a different timeline: the interview was taped “nearly three years ago” and the filmmakers discovered it nine months ago.

“We can chalk the odd time up to a Times error, maybe, as well as possible liberties taken via the show’s editing,” Gawker’s Rich Juzwiak wrote about the lost audio. “But fishier still is the idea that the filmmakers ‘found’ the audio after any passage of time—as though they’d have just stopped listening as soon as Durst stepped into the bathroom.”

Jarecki appeared on Good Morning America Monday morning to clarify The Jinx’s timeline and told George Stephanopoulos that it took him and the filmmakers more than two years to discover the audio when they brought on more editors to look over audio.

“We’ve been in contact with law enforcement for the past two years,” Jarecki said. “And so when we finally found that subsequent admission, what happens in the bathroom, we contacted them and said ‘We have something more.’”