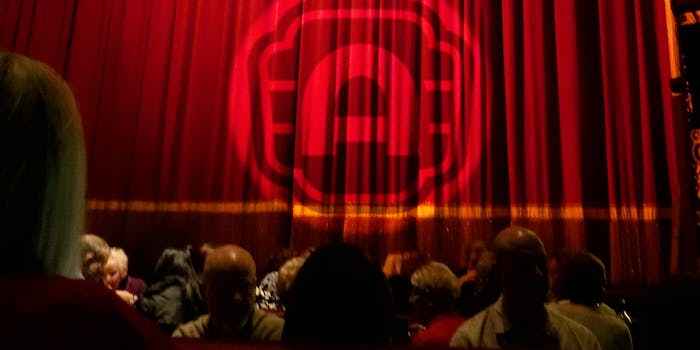 Moviegoers flaunted their patriotism at ‘The Interview’ screenings

Not since Independence Day have you felt this much patriotism at the movies.

Between the Islamic State (also known as ISIS), the Ebola outbreak, and racial unrest over police brutality, the United States faced a turbulent end to 2014. But if there’s one thing that can unite Americans in fellowship and brotherhood at a time when it matters most, it’s cinema.

No, we don’t mean a screening of Team America, but rather a showing of The Interview. Yes, after much debate, Sony finally released its satirical comedy starring Seth Rogen and James Franco as journalists recruited by the CIA to kill North Korean dictator Kim Jong-un.

After the company reversed its decision to cancel the film due to terror threats, the studio released the movie online on Wednesday and in some 300 independent theaters across the country on Thursday. Several theaters took the release a step further by playing patriotic music before the film began.

The Plaza Theater in Atlanta played a four-minute long version of “God Bless America,” and because patriotism is irresistible, moviegoers rose from their seats to join in.

The Alamo Drafthouse in Austin celebrated with a level of patriotism on par with Toby Keith holding bald eagle crying a single tear of freedom: It staged a singalong of Lee Greenwood’s “God Bless the USA.”

Not since Independence Day have Americans felt this much pride about going to the movies. Now if only we could do something meaningful about North Korea’s brutally repressive regime.