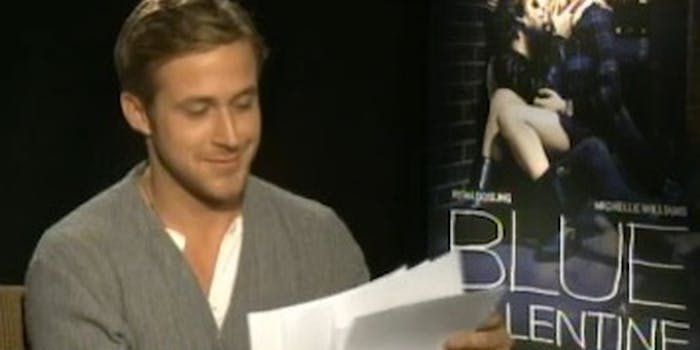 The Hater: Why Ryan Gosling Tumblrs must be stopped

The phenomenon of Gosblrs, as my execrable editor calls them, poses a mortal threat to my digestive system.

Hey, every single person in the world with a Tumblr account, we need to have a serious chat.

Let’s start with the positive: I love what you are doing with the place! Really, it looks great! You are making some good, relevant content to feed the meme gods. Animals Talking in All Caps, Pepper Spraying Cop, Rap Industry Fan Fiction are all decently amusing, so high five, Internet!

But with the good comes the bad. Please stop with the Ryan Gosling-themed Tumblrs, or as Mr. Bossypants likes to call them, Gosblrs. Yes, Gosling is the perfect man and if you say otherwise, well you’re simply wrong. I mean, that face! Those non-Photoshopped abs!

You know how your mom sends you a link to Awkward Family Photos like it’s a new thing and she’s all “OMG LOL” at it and you’re all “… stop.” That’s the Daily Dot’s collective reaction when our friends share a new Gosblr.

Sure, Fuck Yeah! Ryan Gosling was all cute and original—just like the first Miss Congeniality. With both of them, you giggle silently and secretly enjoy it, but fear your friends’ silent judgment when you post about it on Facebook.

Then came the copycats: Feminist Ryan Gosling, Typographer Ryan Gosling, Public History Ryan Gosling, and Librarian Hey Girl (just to name a few out of the thousands). As more develop, they lose their appeal and become as entertaining as the last two seasons of Will & Grace.

You watch it because you started from the beginning and then you’re like “What the hell is this? Do the writers show up anymore? Stop screaming, Karen! Is that all you’re capable of doing?”

Jack would totally have had a Tumblr, by the way. But I digress.

And can we stop with the “Hey girl,” please? Yes, hearing Gosling coo those words to anybody would make one melt into a sloppy mess.

But ladies, if your boyfriend started saying “Hey girl” on the regular, wouldn’t you just want to smack him and then punish him by watching New Girl with your girlfriends while they scream, “If I had my own show, it would be New Girl because Zooey and I are just so adorkable!!”

No, that sounds awful. All of it. I’m puking. Help.

It’s a framed, one-of-a kind collection of all the Gosling-themed Tumblrs that infect our world and make the world’s problems even worse.

This is how I am putting my online journalism degree to work, Dad.

Ryan, you’re great, really! Drive was decent and I’ll always remember you as being in one episode of Are You Afraid of the Dark? And I totally promise I’ll get around to ordering Crazy, Stupid, Love on demand.

So, Ryan, despite my misgivings about the Gosblr thing, I remain totally open to interviewing you about the threat Tumblr poses for our modern civilization.

Take off your shirt?