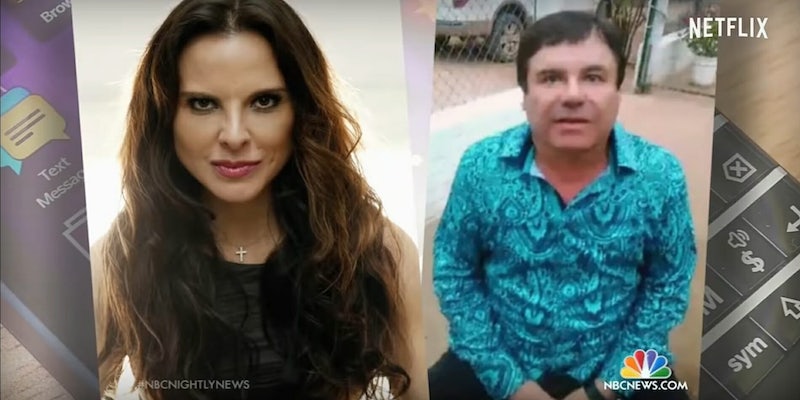 Like most things that happen in modern society, the Netflix doc kicks off with a viral tweet.

On a daily basis we’re reminded that real life will always be more wild than anything movies throw at us. Can you imagine your reaction to a story about a popular actress wanting to meet one of the world’s most wanted men? A story where that actress teams up with a famous actor from another country to conduct the interview? And the interview will pit two countries against each other? If you’re up on current events, you know I’m describing the Rolling Stone interview with infamous cartel leader El Chapo conducted by Sean Penn and Kate del Castillo. It’s a bonkers story, and Netflix’s new documentary, The Day I Met El Chapo: The Kate Del Castillo Story, shows how it came to be.

Like most things that happen in modern society, the story kicks off with a tweet that goes viral. Kate, a famous Mexican actress, lamented the state of affairs in Mexico and tweeted at Sinaloa cartel kingpin Joaquin “El Chapo” Guzman, imploring him to help his country. It’s a bold and reckless move that nevertheless catches the attention of El Chapo. Long story short, El Chapo agrees to an interview and soon Kate and Sean Penn are planning logistics. It’s a surreal story and del Castillo tells it with urgency. But as the documentary progresses the story starts to feel like someone holding court at a party. What I mean is that the story starts to sound much more thrilling for the people who lived it than the audience listening to a retelling.

At a runtime of just about three hours (broken up into three episodes), the documentary is only compelling in fits and starts, with by far the best stuff coming during the last 20 or so minutes. The explanation of how the meeting came to be and how del Castillo and Penn worked together proves to be pretty dull. At one point, when del Castillo explains the brief (but inevitable) romance between the two thespians I rolled my eyes. Then rolled them about just for good measure. That’s where I struggled the most with The Day I Met El Chapo. Del Castillo’s side of the story is important, as later events will prove. But I couldn’t help wanting more than just a recounting of the events.

I’m much more interested in why del Castillo would reach out to a sociopathic drug lord in the first place. The documentary offers some detail upfront, but saves the bulk of it for the end where it feels like too little too late. Del Castillo and some of the featured talking heads (mostly journalists) speak about a lack of trust in the Mexican government. That the discord between the elected officials and the population is strong enough that people trust cartels is fascinating.

The story being told ultimately boils down to a he-said, she-said account. Del Castillo, who executive produces, is getting her version on record primarily because she’s currently facing criminal charges from the Mexican government as a result of the interview. With Penn and El Chapo appearing only in archive footage, del Castillo can control the narrative. She, and the documentary, are constantly reminding the audience that we’re getting one third of the story; t’s interesting, no doubt, but it’s fairly straightforward and grows dull.

As it is, The Day I Met El Chapo functions like a notation for the Rolling Stone article. Until the end of the third episode, that is. The story shifts gears and becomes more about someone using their voice to speak up for all the people that don’t have a voice. As a call for social responsibility, it’s noble and worth exploring in this context. I don’t doubt the sincerity of del Castillo or her collaborators, but the way the documentary handles this creates a tonal whiplash effect. The repercussions from the interview have reverberated much longer than the interview itself, so I wish the final 30 minutes had been stretched out and allowed to breathe.

The Day I Met El Chapo: The Kate Del Castillo Story left me wanting more. It’s been a strong year for Netflix documentaries. This one doesn’t rise to the level of the streaming service’s best offerings. It has its strong moments but not enough for me to recommend it.