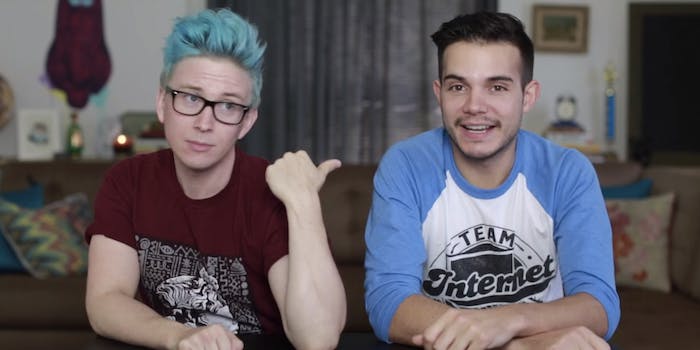 Viners and YouTubers will race around the world for $1 million and prizes.

Digital stars and mainstream television will once again intersect on the next season of The Amazing Race, which will fill out its cast with YouTube and Vine celebrities accustomed to doing crazy things on camera for fun and profit.

First to be announced is YouTuber Tyler Oakley, joined on the journey by his best friend and podcast co-host Korey Kuhl. Other cast announcements are trickling out on various YouTuber and Vine accounts. Beauty and fashion vlogger Blair Fowler has announced that she’ll be running the race with her dad, and Rooster Teeth founder Burnie Burns will run with his partner Ashley.

The Amazing Race has featured Internet celebrities in the past, most famously YouTubers Joey Graceffa and Meghan Camarena, who competed, and lost, on two earlier seasons.

Oakley said on Twitter that teams are leaving for the race immediately. The show will play to the digital strengths of its cast, with host Phil Keoghan livestreaming the start of the race on his Facebook page.

The digital celebs will have to endure a total social-media blackout during filming, meaning that fans will have to do without their favorite YouTubers for almost a month.