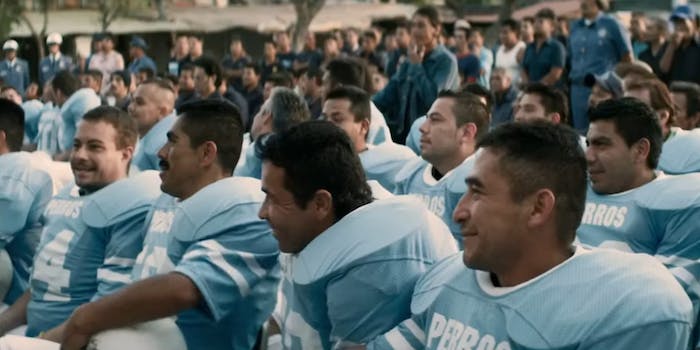 The 4th Company is a Mexican crime film in the vein of Goodfellas, City of God, and A Prophet. Despite slick production, it does not rise to the level of its influences. But you can see what co-directors Mitzi Vanessa Arreola and Amir Galvan Cervera are aiming for. The film struggles to strike a balance between reporting history and telling an interesting story. The 4th Company is at its best when showing the day-to-day life of its protagonist. When the film expands its scope, it loses its intimacy and some of its spark.

The film is set in the late 1970s and follows Zambrano, a young man sent to the Mexico Distrito Federal Penitentiary for car theft. Zambrano’s defining trait is his love for American football. He even brings shoulder pads and a helmet with him to jail. Why would someone do this? To join the prison’s football team and play in Mexico’s first football league, of course. Zambrano, played with hesitant confidence by Adrian Ladron, is a blank slate when he enters the pen. As he learns more about prison life flashes of personality break through—just enough to give the audience something to invest in.

But the real reason The 4th Company exists is to dramatize the institutional corruption of the Mexican prison system. Zambrano joins Los Perros but quickly learns that as a Dog he is expected to do more than score touchdowns. Los Perros are the warden’s personal goon squad. Los Perros are the 4th Company. They spend more time collecting debts, enforcing punishments, and pulling jobs for Chaparro (Manuel Ojeda) than they do on the field. With good reason. The movie flexes its muscles when Los Perros do the same. Even though pulpier parts of the story cover things audiences have seen a thousand times over, there is a noticeable energy during these scenes. Compare that to the football scenes, which are disjointed and visually dull.

While the football aspect of the story is important, the way the script, written by Arreola, incorporates it feels like an afterthought. Arreola and Cervera are clearly more interested showing the corruption of the prison system, going so far as to close the film with real footage of a 2016 prison riot. I’d like to see the two make a documentary about this topic.

The 4th Company reaches for a high bar but frequently loses its grip. If you enjoy crime films, this one will scratch your itch until the next one comes along.