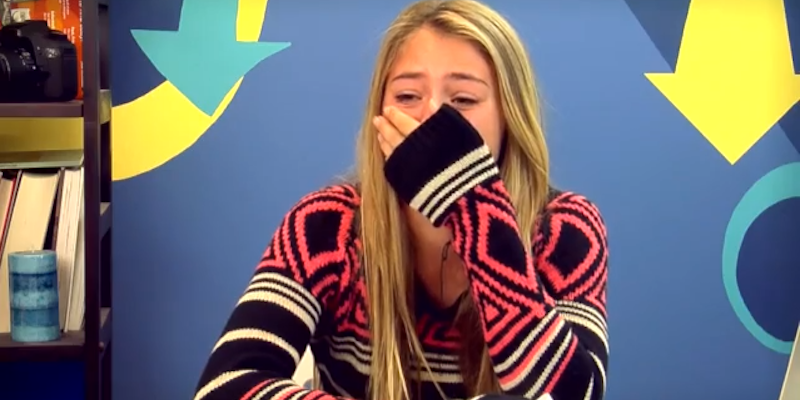 “Teens React” producers Benny and Rafi Fine have shown they aren’t afraid to discuss serious topics, such as Amanda Todd’s suicide—a recent tragedy that hit close to home for many of their young subjects.

Most of the teens had already seen the haunting video that the Canadian teen, who would have turned 16 last week, posted to YouTube in early September, which told her personal story of how bullying both on- and offline made her switch schools and drove her towards drugs, alcohol, and suicide attempts.

They were floored by Todd’s cue-card confession and shocked to find out that she killed herself just one month later.

Other condemned the hateful messages posted online after Todd’s death and voiced the difficulty in reaching out to a parent or teacher when dealing with cyberbullying. Nearly all of the teens had been bullied at one point in their lives.

The Fine Brothers previously covered bullying (and briefly touched on cyberbullying) in October 2011 on Kids React after a video of a bullied kid fighting back went viral, but they felt that it was important to continue the conversation on bullying with the teens.

“One reaction we were not expecting was the almost unanimous feeling of apathy and hopelessness from all of the teens when it comes to cyberbullying,” the Fine Brothers told Mashable. “They all felt so completely alone in this fight and struggle against this huge problem, and felt with the advent of the Internet, laptops, and smartphones, you can never escape being bullied anymore.”

Lia, 15, the only reactor to be featured in both of the Fine Brothers’ bullying videos, hadn’t seen or heard about Todd prior to the making of the episode and was brought to tears. She and the other teens struggled to comprehend the situation and to find a solution to cyberbullying.

The teens shared their bullying stories as did many viewers in the comments, even weeks after the video first went online.

“It is difficult to see so much pain from so many people, but also inspiring to see so many saying that this episode helped them with their own thoughts of depression, suicidal thoughts, etc. and being inspired by it to take action against bullying in their own lives and the people around them,” the Fine Brothers noted.

Photo via The Fine Brothers/YouTube