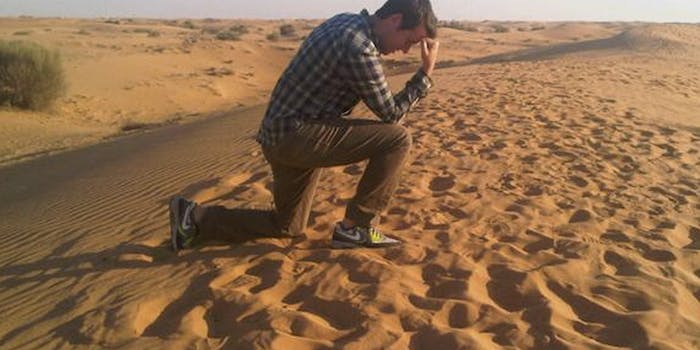 Can you own a meme? Apparently so, if it's named after you.

A lawsuit filed by a superstar athlete brings up a unique case: Can anybody really own a meme?

If it’s named after you, the answer seems to be “yes.”

Last fall, in imitation of outspokenly Christian NFL quarterback Tim Tebow, Internet users around the world shared pictures of themselves kneeling on one knee, as if praying. The act, appropriately, was quickly dubbed “Tebowing.”

According to a recent trademark ruling, that pose will soon belong to Tebow—at least for merchandising purposes.

The legal drama stretches back to Oct. 23, when Jared Kleinstein took a picture of himself imitating the then-Denver Broncos quarterback. According to Know Your Meme, that was the first fan photo of the pose to go viral. That inspired Kleinstein to start a Tumblr and purchase the domain Tebowing.com, which now hosts hundreds of pictures of fans striking the pose. The site also includes a link to buy Tebowing-themed t-shirts.

At the time, Tebow himself was on board with the trend, tweeting Oct 27: “#Tebowing – to get down on a knee and start praying, even if everyone else around you is doing something completely different. Love it!”

As it happens, that was same day Kleinstein first filed for trademark of the word for his burgeoning T-shirt business.

Kleinstein wasn’t the only person to try and get in on the action. A Florida man, Jason Vollmer, started the website TebowingGear.com, which sells shirts of Tebow’s silhouette as he makes the stance. Vollmer tried to trademark “Tebowing” on Dec. 6.

“Tebowing Gear was started in Jacksonville Florida, the hometown of NFL Star Tim Tebow,” the site says. “Our products are the result of the people of the city wanting to show support and admiration for the hard work and perseverance of Timmy.”

It bears noting that Tebow is a long-established Florida football star—both as a high school phenom growing up near Jacksonville, then as a highly accomplished quarterback for the University of Florida.

Two weeks after Vollmer’s claim, Tebow’s lawyer, Anthony Keats, filed suit on his client’s behalf. In it, he claims the rights to practically any goods that might one day bear the Tebowing word or image, extending even to kites, toy vehicles, jigsaw puzzles, and “infant onsies.”

According to Newsday, a U.S. trademark attorney recently denied both Kleinstein and Vollmer, arguing their claims were based on a “false connection” to a living individual.

Kleinstein has until Aug. 22 to appeal, but legal experts who spoke to Newsday don’t think he has much of a case.

As of press time, there are no similar claims for “Bradying”—the act of sitting down, legs stretched out, seemingly defeated. There are, however, two competing claims for “Linning,” in honor of New York Knicks guard Jeremy Lin.