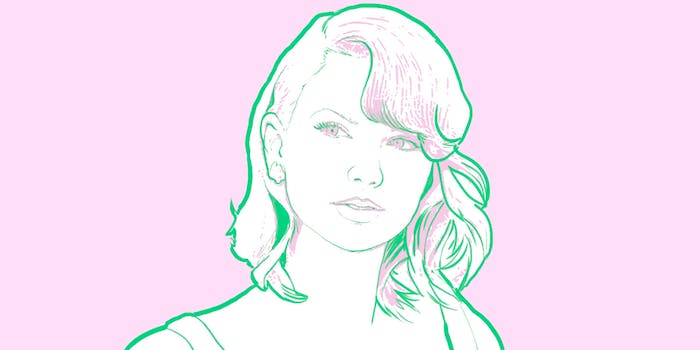 Now we've got problems and I don't think we can solve 'em (without help from the U.S Patent and Trademark Office).

Until the unprecedented success of Adele‘s new album 25 knocked her from the top spot, Taylor Swift was the undisputed queen of pop music in 2015. Her fifth full-length studio album, 1989, topped the charts, her complaints regarding how Apple was paying musicians got the company to change its policies, and she more or less got away with awkwardly touching the Weeknd‘s hair.

All in all, a banner year. And now Swift wants to commemorate the occasion by trademarking that which she helped bring into the public consciousness. As the blog Tantalizing Trademarks reports, earlier this month, Swift filed a gaggle of trademark applications through her holding company, TAS Rights Management.

Swift is hoping to trademark the name of her newest album (“1989”), the name of one of the hit songs on that album (“Blank Space”), a lyric from that song (“And I’ll Write Your Name”), the title of an unpublished novel Swift wrote as a teenager (“A Girl Named Girl”), and the term for Swift’s random acts of kindness—such as writing a check to help pay off the student loans of a fan who made a video mashup of Swift having fun with her friends (“Swiftmas”).

The “1989” application only specifies use of term in a “stylized” form, meaning that, when Tim Burton’s original Batman film is re-released, producers probably won’t get hit with a lawsuit for boasting it was the highest-grossing film of 1989. Unless they replace Prince’s original soundtrack with Swift songs and don’t check with Swift first.

Nevertheless, intellectual property lawyer Fiona McBride told the BBC that convincing the U.S. Patent and Trademark Office to rule in Swift’s favor isn’t guaranteed. “While she may well be granted protection for a stylized use of the number 1989 on her album and distinctive terms such as “Swiftmas,” it will be very difficult to completely monopolize a song lyric and prevent others from using it,” McBride said.

Swift has had good luck in the intellectual property arena so far this year. Last month, a California judge dismissed a copyright infringement lawsuit by an R&B singer who accused Swift of stealing lyrics from one of his songs for her hit “Shake It Off.” In her decision, the judge used a bevvy of Swift’s lyrics to produce one of the most memorably clever court documents in ages.

If successful, this month’s filing won’t be the first time Swift has trademarked phrases and ideas she’s popularized. Swift also holds trademarks on phrases like “This sick beat,” “Cause we never go out of style,” “Could show you incredible things,” “Taylor Swift,” “T.S.,” “Love, Love, Love,” “Fearless,” “Speak Now,” “Party like it’s 1989,” and “Nice to meet you, where you been?”

Swift’s legal team has been fairly aggressive in enforcing the rights to intellectual property they do hold. After Ronnie Cremer, Swift’s childhood guitar teacher, registered the domain name ITaughtTaylorSwift.com, he was hit with a cease-and-desist letter from TAS Rights Management. Similar letters were sent to sellers on the online marketplace Etsy offering products bearing the singer’s likeness and song lyrics.

Much of the reaction on Twitter to the news of Swift’s applications was largely negative.

Taylor Swift should try and trademark "trying to trademark pettily obscure things in an attempt to protect her incredibly massive income".

The year was 2065. Canadians all spoke klingon because Taylor Swift now owned every word in the English language… https://t.co/vlOmLyvfbm

Luckily for them, “haters gonna hate” is still free to use.