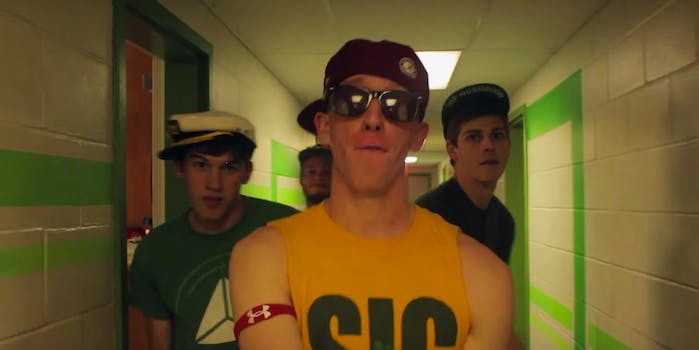 A “Shake It Off” lip dub video from the Transylvania University chapter of the Delta Sigma Phi-Beta Mu fraternity came full circle on its virality this week when 37 kids from the local Big Brothers Big Sisters program got to go to a Taylor Swift concert.

It’s been a strange journey.

Back in September of 2014, the frat brothers uploaded their lip dub to YouTube to help raise money for their team in the Leukemia and Lymphoma Society Light The Night Walk.

The video—which was shot in a single, cutless take—got way more pickup than the bros had expected, and within days Taylor Swift had vowed to invite them to her next Kentucky show on Twitter.

Which brings us up to this month. Swift’s 1989 world tour was scheduled to stop in Kentucky, and true to her word, she sent the fraternity enough tickets for each of the brothers and a date to attend.

The tickets came through! Thanks @taylorswift13 pic.twitter.com/UWDafxPlTG

But instead of bringing dates, the brothers donated their plus-one tickets to their local Big Brothers Big Sisters chapter, and gave 37 kids the chance to come with them to see Taylor Swift live.

It was reportedly a lot of the kids’ first concert experience ever, and if the tweets are any indicator, everyone had a great time.

In true frat fashion, the brothers made custom T-shirts to commemorate the occasion:

We can't thank you enough @taylorswift13, from us and Big Brothers/Big Sisters. Hope you got your Sig shirt too! pic.twitter.com/GPUIMTgJx6

Then, during the seating process, Swift played the lip dub on the big screens:

And, as a cherry on top, Swift and her dad swung by to chat:

When you meet @taylorswift13 and her dad gives you guitar picks #imdone pic.twitter.com/ko5sZSby7J

The brothers may not have planned it this way, but their video might go down in the books as the most successful lip dub of all time.