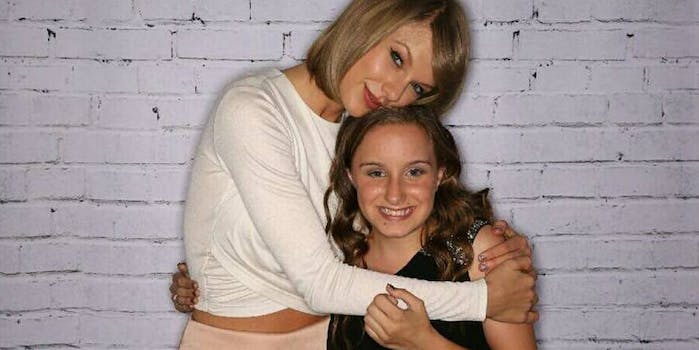 She has her twin sister to thank.

Australian fan Jorja Hope, who wanted to meet her idol Taylor Swift before a degenerative disease took her hearing, got to live dream thanks to social media.

Jorja was diagnosed with a condition that would cause her to one day go deaf. Although she doesn’t know when she’ll completely lose her hearing, one of her concerns was never being able to hear her favorite singer, Swift, again.

In response, Jorja’s twin sister Chloe started a Facebook page and hashtag campaign to raise awareness and give Hope her dream of meeting Swift.  After the hashtag went viral in Australia, Sydney radio station, Nova 96.9, stepped in an facilitated the meeting.

“I didn’t expect her to be as tall as she was,” Jorja told her hometown paper, Maitland Mercury. She brought Swift UGG boots as a present.

Jorja’s story is far from the first hashtag campaign to get a deserving child an audience with Swift. In May Delaware police helped a campaign for a young cancer survivor with Down Syndrome to meet the pop star as well.