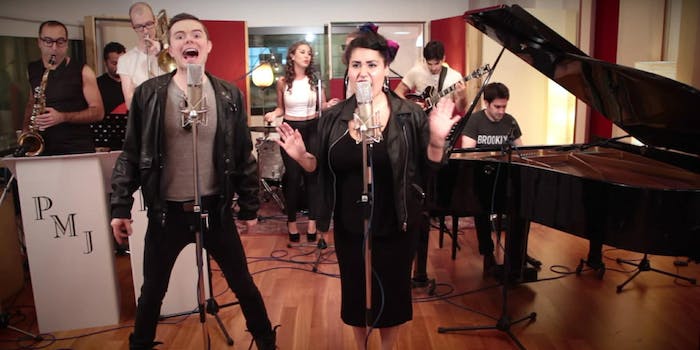 Ryan Adams is late to the party.

Taylor Swift is one of the world’s most-beloved musical artists. So much so that this week her 2014 release 1989 got a complete alternative-rock makeover, courtesy of notoriously self-serious Ryan Adams.

But while the singer-songwriter’s take on “Bad Blood” received early praise, those who aren’t Adams fans would call his effort to remake Swift’s album in its entirety boring and repetitive after listening to all the songs in one go.

And he’s already late to the party. The Web has spent most of the last year revisiting Swift’s massive album with wild covers. To help inject color back into your drab Swift sound trip, we’ve collected nine 1989 songs with much more dynamic cover versions.

This simple guitar-and-shaker cover exudes a beach vibe that’ll make you wish it were still summer and you were by the pool, enjoying a frozen margarita.

This song has a lot of bold renditions on YouTube, including a mashup and this punk take by Hey Violet, both of which Swift herself was obsessed with.

If you’d like to hear the track infused with a little bit of the Ben E. King classic “Stand By Me,” Imagine Dragons has you covered.

And finally, just because Kelly Clarkson can do no wrong and is pretty awesome at covering almost any song, here’s her great live version of the hit:

As far as changing styles goes, remaking this one has got to be a fun feat for any musician out there. The artists behind this Grease-inspired cover nailed the makeover.

On the other hand, this stripped-down harp version of “Style’s” already-haunting feel is the relaxing break you definitely need between listens.

5) Meghan Trainor and Jesse Will – “Shake It Off”

For Lip Sync Battle fans, when we think of “Shake It Off,” we immediately think of The Rock. If you’re looking for a slow, mellow version of the dance track, you might enjoy this cover by Meghan Trainor.

If you’d like a take on the shake provided by an incredibly soothing male voice, we’d like to introduce you to Jesse Will.

The star-studded music video of this song is pretty darn memorable, so it would take a lot of effort to spin the track into something refreshing. Thanks to newcomer Alessia Cara—who debuted her single “Here” on The Tonight Show Starring Jimmy Fallon, after Fallon insisted on booking her for the show—we now have something amazing to enjoy.

Most of Swift’s songs on 1989 are pretty good in their original forms, but in some cases, the unplugged versions of these tracks that float online are lovelier on the ears. Case in point: Drew Tabor’s walk-in-the-park rendition.

One bullet-proof way of knowing a cover is worth listening to is if the person being covered endorses it. Vance Joy’s “I Know Places” is definitely up there among the Swift cover contenders—at one point it was even Swift’s ultimate fave:

There have been so many amazing covers of 1989 songs…
I’m going to be bold enough to say this one is my favorite.
http://t.co/JiJhpvpRup

Thanks to Imogen Heap—who wrote and produced the track along with Swift—”Clean” features a dream-like tempo that is truly captivating. Ingrid Michaelson’s cover of the song, performed alone on the piano, made the track extra vulnerable.