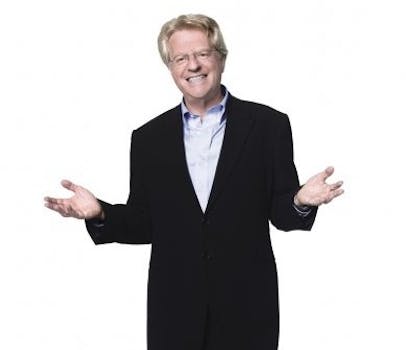 Even bronies want their fifteen minutes of fame, but a voice actress from My Little Pony warns them not to get it from a trashy TV host.

Jerry Springer, best known as the host of a trashy TV show featuring fistfights, freaks, and paternity tests, has his eye on the Internet’s fastest growing fandom.

In other words, Springer is inviting a brony—an adult fan of My Little Pony: Friendship is Magic—onto his show. On Tuesday, Springer (or an assistant) tweeted this query:

“.@SpringerTV You know the Brony thing is not supposed to be sexual, right? Please tell me you know this,” @PrimitiveManPrd tweeted.

A few short hours after the Springer tweet, voice actress Tara Strong urged her fans not to respond to the TV host. Strong plays lead pony character Twilight Sparkle and is regarded as a supreme leader in the brony fandom.

“Listen to your queen Bronies….NOPONY go on Springer,” she wrote.

Thousands of bronies have been discussing the query on Facebook’s Brony group, where a “Flim Flam Alert” warning bronies not to talk to Springer has been shared more than 450 times. The call of their leader came as a relief.

“I feel a little safe, Tara strong tweeted a warning about Jerry Springer and his Show,” Alex Margavio wrote. “And almost every brony follows her on twitter and listens to her advice. so there’s that at least but we’re not completely off the hook yet…”

“The sad thing is, they are going to hire people to act like what people think Bronies are like,” frostyuno wrote. “I used to work with a guy (at a Waffle House) who would get calls to appear on Jerry Springer as ‘Boyfriend X’ or ‘White Supremacist Y’ every few months.”

Whether an actor or a well-meaning brony edited to look nuts, frostyuno thinks Springer is going to get what he wants. However, he doesn’t think it’ll matter.

“The moral is, Jerry gonna get his crazy. Thankfully, no one watches the show for its hard hitting truth or thought. They watch it see crazy people shout and throw chairs at each other.”