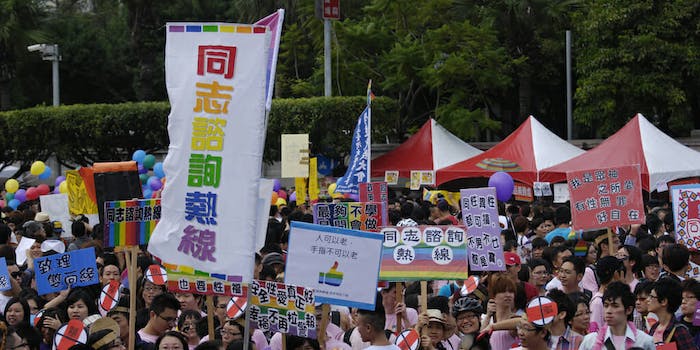 Ahead of a Taiwanese referendum on same-sex marriage, YouTube spreads misinformation.

Ahead of Taiwan’s midterm elections on Saturday, which will include a referendum on same-sex marriage, an anti-LGBTQ group is running ads on YouTube before children’s videos, TechCrunch reports.

Although Taiwan’s courts legalized same-sex marriage last year, efforts by anti-gay organizations have managed to get three items on the midterm ballot that could threaten marriage and other rights for LGBTQ folks.

According to TechCrunch, the same organizations have been running a homophobic misinformation campaign across social media platforms ahead of the elections. One group in particular, 3 Yes, has been placing an ad on YouTube that frequently appeared before children-geared content like the popular Super Simple Songs channel.

The ad is set in a school. It attacks Taiwan’s Gender Equity Education Act, which TechCrunch reports was “passed in 2004 to promote gender equality and prevent discrimination,” and will appear in two referendum items in the midterms. Here’s how the ad plays out, per TechCrunch:

A girl says “He must be 80 percent like a girl,” referring to a boy, who gets upset and runs home. Upset, he asks his parents, “My classmates are laughing at me for being 80 percent like a girl. Do you think I’m a boy or girl?” as they look in shock at the textbook. His older sister then turns to their father and says, “Dad, you must be 100 percent girl” as both parents gape at her in horror.