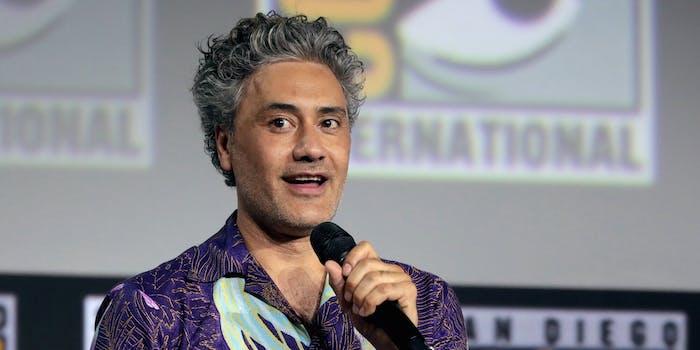 He's co-writing with Krysty Wilson-Cairns, the co-writer of 1917.

There have been rumors of a Taika Waititi Star Wars movie for a while now, but LucasFilm just made it official. As a surprisingly big announcement for Star Wars Day, the studio revealed that Waititi will direct and co-write a new film in the franchise.

As an accomplished blockbuster sci-fi/fantasy director (Thor: Ragnarok) and now Oscar-winning screenwriter (Jojo Rabbit), Waititi is an obvious choice for Star Wars. He’s long expressed interest in the franchise, although he did joke a few years ago that he’d be “fired within a week” if he ever got his hands on a Star Wars movie. It’s certainly true that Disney has a patchy history with keeping filmmakers onboard, but if Waititi can make it work with Marvel, he probably knows the deal already. Like Rian Johnson, he’s someone who can provably work within the studio system and still produce entertaining, artistically interesting work.

Krysty Wilson-Cairns (1917) will co-write the new movie with Waititi, making this the first Star Wars film without an all-white, all-male core creative team. This news arrived shortly after the exciting announcement that Russian Doll co-creator Leslye Headlund is making a new Star Wars show for Disney+.

In the wake of The Rise of Skywalker, the franchise’s future is still pretty uncertain. Several projects have been announced and either canceled or quietly dropped out of sight, including an untitled trilogy created by The Last Jedi writer/director Rian Johnson. There’s no news yet on what Waititi and Wilson-Cairns’ movie is about, or when it will take place in the Star Wars timeline.