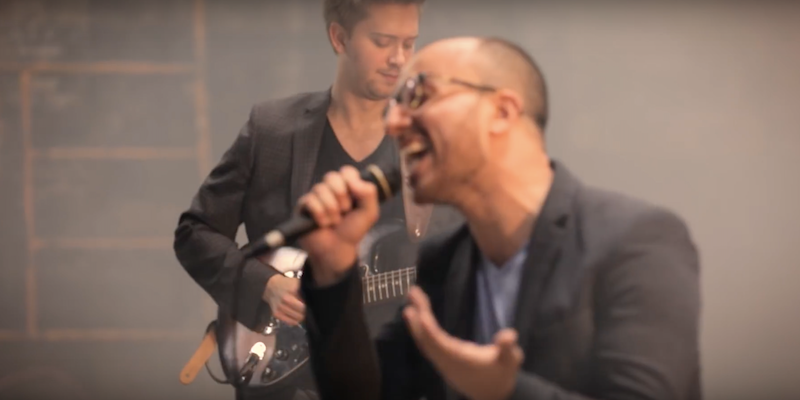 Screengrab via Bassel and the Supernaturals/YouTube

While SXSW announced the showcase on March 8, plans for the event really started on Feb. 20—long before SXSW’s artist contract went viral online on March 2. Matthew Covey of Tamizdat launched a Kickstarter in an effort to raise funds for the event, and got to $18,000.

Because President Trump’s latest executive order was issued on March 6, none of the artists on the showcase will travel from one of the banned countries in question. Instead the organizers curated a diverse lineup from the U.S. and Europe packed with performers no longer living in their home countries.

Lead vocalist of Bassel and the Supernaturals, Bassel Almadani, sees the showcase as an opportunity to raise awareness for a cause dear to his heart—the Syrian refugee crisis.

As a first generation Syrian-American, Almadani sees firsthand how the crisis directly affects his own family, all of whom either live in Aleppo or have become displaced because of war. Almadani told the Daily Dot some of his relatives who began the process to immigrate to the U.S. five years ago have been affected by Trump’s immigration ban. Almadani, however, also sees a silver lining to the order because he thinks it boosts U.S. awareness and inspires citizens to do something.

“Honestly the immigration ban going on to begin with generated a lot of interest, particularly from the other side who are now more likely to speak up and resist these policies and take a stand in alliance with their neighbors,” Almadani said. “Through this immigration ban there are more people making noise, that were part of this showcase through SXSW.”

The lineup is truly diverse, not just geographically, but also musically. Dena El Saffar will open the showcase with  a more traditional sound while Mohsen Namjoo merges traditional music with funk. Faarrows music has a more club-friendly feel, and Bassel & the Supernaturals play jazz-funk. Kayem even adds hip-hop to the mix.

Each band, however, shares one major trait: The groups hope to create social awareness and acceptance of their culture in the U.S. through their music.

“The whole underlying social mission of [what] we’re doing as a band—at least for me—is really amplifying the voices of over 10 million Syrian voices that right now aren’t being heard,” Almadani said. “This gives us an opportunity to be heard.”

It’s a mission that SXSW has taken to heart.

“The Executive Order restricting entry to the United States from Iran, Libya, Somalia, Sudan, Syria and Yemen has had a profound impact on the landscape of international communities,” SXSWs Haydon Bagot wrote in a press release. “Music has always been a medium for celebrating love and unity, but it is also a powerful vehicle for addressing social and political injustice in a way that builds up communities instead of turning them against one another.”