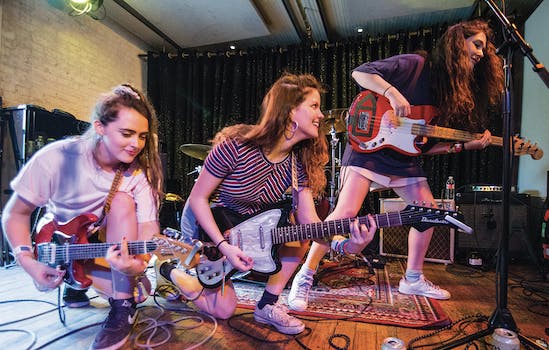 'U.S. immigration law has always carried potentially severe consequences, and we would be remiss not to warn our participating acts.'

South by Southwest (SXSW) responded Thursday evening to outcry against its artist contract, which warns international acts that they might be deported if they play unofficial concerts while in town. But the Austin, Texas-based festival said it has never reported musicians to immigration authorities, and is just pointing out the law.

“We understand that given the current political climate surrounding immigration, the language that was published seems strong,” SXSW Managing Director Roland Swenson said via email. “Violating U.S. immigration law has always carried potentially severe consequences, and we would be remiss not to warn our participating acts of the likely repercussions.”

This in response to tweets posted by Felix Walworth, drummer of New York-based indie pop band Told Slant, announcing that their band canceled all of its official SXSW showcases after learning about the organization’s policies regarding international artists playing unofficial showcases.

Walworth shared a portion of the artist contract they received from SXSW that specifically relates to bands coming to Austin from other countries. According to the contract, SXSW tells those bands that if they act in ways that “adversely affect the viability of their official SXSW showcase,” the organization retains the right to not only cancel their showcase and revoke their credentials, but they will also attempt to have the artists deported:

International Artists entering the country through the Visa Waiver Program (VWP), B visa or any non-work visa may not perform at public or non-sanctioned SXSW Music Festival DAY OR NIGHT shows in Austin from March 13-19, 2017,” the contract says. “Accepting and performing unofficial events may result in immediate deportation, revoked passport and denied entry by U.S. Customs Border Patrol at U.S. ports of entry.

“That they’re willing to threaten deportation is enough evidence for me that they don’t care about anyone including the artists that lend them their legitimacy,” Walworth wrote. “When we allow our alignment with institutions like this to be our metric for success as artists we are seriously failing.”

This section of the artist’s contract does seem like a response from SXSW to the popularity of unofficial events throughout the week. Even U.S. artists pay a penalty if they play unofficial showcases: They potentially lose their hotel room and SXSW credentials.

Swenson maintains that particular section of the contract was drafted years ago, to “protect SXSW and the interests of all the participating artists.”

Unofficial showcases are incredibly common during SXSW. Unofficial show listings provided by the Austin Chronicle display just how huge this indie portion of the week has become for locals. All-access music badges cost up to $1,000, while music festival wristbands available to Austin locals cost $169. To widen bands’ audiences, they often play free unofficial showcases to the general public who might not be able to afford those prices. Spanish indie rock band Hinds, for example, played more than 10 showcases last year, and a handful of those shows were unofficial.

Walworth takes issue with SXSW’s contract because they feel it exploits international acts.

“I’m not interested in aligning myself with an institution that interacts with immigration authorities as a means of controlling where art is shared and performed, and who makes money off of it,” Walworth tweeted. “It’s no secret that SXSW has played a huge role in the process Austin’s rapid gentrification. The whole festival exists to the detriment of working class people and people of color in Austin.”

Walworth and other users on Twitter referenced historical backlash the festival has received due to its interaction with the local community. While SXSW’s website annually shares its economic impact on Austin – last year the festival contributed $325.3 million to the city’s economy – many locals protest that the festival has become too corporate. In 2015 locals were outraged when a family owned piñata shop was controversially demolished right as the site was turned into a venue for SXSW.

On the other hand, SXSW has also been vocally supportive of immigrants. The festival organized a showcase that will feature artists affected by President Trump’s Muslim travel ban, called “Contrabanned: #MusicUnites.” Directly following the announcement of Trump’s executive order that banned immigration from seven Muslim-majority countries, SXSW posted on Instagram that it was alarmed by the administration’s decision.

Our response to the #MuslimBan.

Fans on Twitter expressed their disappointment with SXSW’s contract and urged Told Slant to keep the unofficial dates in Austin, even if they cancel their official showcase.

“Unofficial events long seen by SXSW as a thorn on their side. Just take everything off their grid,” user Grim Duncan tweeted. “They’ve co-opted as many unofficial events as possible in order to further shutout working locals.”

weirdly hypocritical considering how they're also putting this on too. pic.twitter.com/lEpTV5UXor

Other users were more sympathetic with SXSW, calling attention to U.S. immigration laws and the festival’s history of being outspokenly supportive of international communities.

It is my impression that this is a term of the visas some acquire to specifically play SXSW.

Words are hard, I realize but this is a gross overreaction to a legal disclaimer, not a threat or promise to report.

In an interview with the Austin Chronicle, Swenson said Walworth copied and pasted two parts of the contract “in a way that is misleading and out of context.” Walworth responded to this accusation on Twitter with a video that scrolls through the contract.

the managing director of sxsw accused me of pasting together two parts of the contract to make it sound worse than it is. Here's a video: pic.twitter.com/wDaCBiCDBx

Like it or not, the festival is in the middle of America’s contentious immigration debate.

“SXSW is a source of incredible pride for Austin and Texas,” U.S. Rep. Joaquin Castro (D-San Antonio) tweeted. “I hope the festival will clear this up soon.”

Correction: This story has been updated to reflect the gender identity of Walworth.