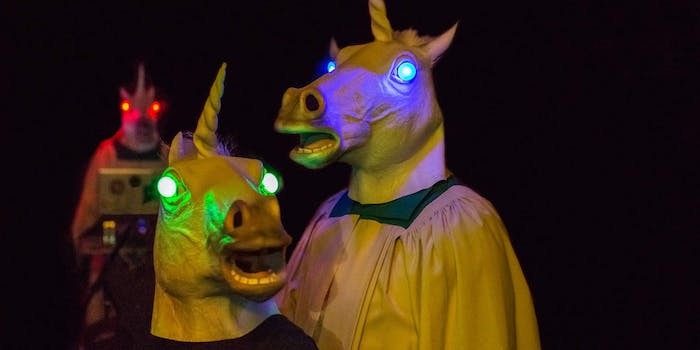 12 bands you have to check out at SXSW

All of you startup bros can go shave your backs now. Wednesday kicks off the traditional and continually rowdy music portion of the South by Southwest conference in Austin, Texas.

More than 2,000 bands are headed into town to verify buzz and play six shows in two days. It’s basically candyland for music nerds, but you need a road map.

From: Melbourne, Australia
Where: Wednesday, Stubb’s
Who: This singer-songwriter’s debut album doesn’t drop until after SXSW, but the charming odds and ends she’s recorded so far—collected on the marvelous double EP A Sea of Split Peas—bespeak a natural talent and singular style. Crossing surf guitar with folksy slackerhood, Barnett pulls sunny hooks out of a clear blue sky and wraps your brain in baroque wordplay, all filtered through an A+ sense of sarcasm. (The 1990s are forever, you guys). What’s more rock and roll than nailing every move while sounding like you don’t give a fuck either way? —Miles Klee

From: Chicago
Where: Saturday, 405 Club
Who: Hip-hop’s SXSW delegates are doomed to be overshadowed by genre one-off parties from the likes of Kanye, Chance the Rapper, J. Cole, and other mainstays here to play. But it’s a starting line anchored with big voices: the violent, this-can’t-be-life urgency of Chicago’s Lil Herb; Fetty Wap’s dominant single-of-the-moment “Trap Queen”; the second-act, post-hype cloud rap of Main Attrakionz; the Bay Area crank of Kool John; the added seasoning of international cliques like Montreal’s The Posterz. Chicago’s Alex Wiley is my favorite newbie, because his mush-mouthed motor is the most fearlessly creative. He’s always been an outsider (“I’m the kid in school n****s ain’t wanna sit by”) disinterested with the usual creative channels (“I value my lungs, fuck swishers”). He just kind of flings it all at the wall without a filter but has a smooth ear for songwriting. Last summer’s “Own Man” was a nuanced, sticky anthem about the perpetual, proverbial struggle. But this month’s *one singular flame emoji ep* is overstuffed with manic patterns that run up on you with a ski mask. —Ramon Ramirez

From: Austin
Where: Thursday, Red Eyed Fly
Who: Austin’s own Total Unicorn does exactly what it says on the box—this is a band that is 100 percent unicorn. The duo makes brilliantly blissed-out, hyper-kinetic electronica that exists right on the bleeding edge of danceable. The sound is fantastical fun, just like a unicorn, but also with an edge of menace—like a unicorn that could run you through with its horn if you look at it sideways. Live, the band dons matching unicorn masks and drowns the stage in mind-bending visuals and dancers who are, of course, also unicorns. It’s a bizarrely enthralling spectacle that is, unquestionably, all unicorn. —Aaron Sankin

From: Calgary, Canada
Where: Thursday, Cedar Street Courtyard
Who: If you liked (and miss) the crooked strains of fellow Jagjaguwar band Women, you’ll find comfort in Viet Cong, which includes two former members. The quartet’s self-titled album certainly echoes Women’s penchant for chiming guitars and interlocking melodies, but builds upon it rather than just treating this as take two. The video for “Silhouettes” is the perfect visual companion to the textured harmonies and sharp corners of the debut. —Audra Schroeder

From: Amsterdam, The Netherlands
Where: Friday, Hotel Vegas Patio
Who: This 24-year-old flying Dutchman is one of South by’s most compelling pastiche singer-songwriters. Jacco Gardner is at heart a studio addict who likes the closely guarded baroque pop of ‘60s super auteurs like Brian Wilson and Curt Boettcher. The new record, Hypnophobia, is out in May and leadoff single “Find Yourself” borrows from all the right corners of psychedelia. —Ramon Ramirez

From: New Orleans
Where: Wednesday, Monster Energy Outbreak House
Who: New Orleans rapper Boyfriend has penned songs about periods and grannies, but 2014’s “Swanky” is the song you can’t get out of your head. When we spoke to her last year, she previewed her EP, Love Your Boyfriend, saying, “I’ve never rapped about love before, and I was listening to a lot of ’60s soul records, and there’s this theme of codependency and need. And then I watched more recent videos, and the story hasn’t changed that much. We just sort of passively digest these songs about love, and I don’t really define love that way. So this is Boyfriend turning that on its ear.” Latest single “Jealousy” gets in bed with that idea. —Audra Schroeder

From: Nashville, Tenn.
Where: Saturday, Central Presbyterian Church
Who: Georgia-born Mackenzie Scott is a 24-year-old alt rock monster blessed with panoramic vision. Her writing is sweeping, total, and bitterly human. “Strange Hellos” is the hardest rock anthem of the year, building a sneering sandcastle then kicking it down before the tide can step in. She’s tired, made some mistakes in Kansas City, Mo., unsure how to feel about God, thinks you’d drown to save yourself. She’s down here elbowing with Courtney Barnett for PJ Harvey comparisons, but that’s just an elevator pitch—the upcoming Sprinter (out May 5 on Partisan Records) is so good I might upload my press copy and spam you with a link. —Ramon Ramirez

From: Detroit
Where: TBD, though she performed Tuesday night at Blackheart
Who: East Detroit’s Dej Loaf  is a surging, car door-slamming voice that’s built a nascent empire of cosigns from the strength of one spellbinding single, “Try Me.” Young Jeezy and T.I. liked it enough to snake onto a remix, Eminem swooped in for a feature, and Nicki Minaj has already tapped Loaf as an upcoming tour opener. But she’s worth an official seal of approval here. “Hardcore” channels the warm soul of Lisa “Left Eye” Lopes. New single “We Be On It” is probably better, and a zoned out pub crawl. She has a petite and soft voice, but it’s harrowing and specific with respect to firearms. —Ramon Ramirez

From: San Francisco
Where: Thursday, Maggie Mae’s
Who: There are a lot of things about the Stone Foxes that allow the band to turn its classic rock into something fresh. They’re a San Francisco rock band that relishes a blues-y stomp rather than hazy psychedelia or garage trash. They make sweat-soaked, sing-along party rock, but do it about social justice and collect canned goods for the homeless at most of their shows. When they sing about the murder of legendary bluesman Robert Johnson, they do it from the perspective of his killer. Lest all of this sound too serious, the band basically acts like unrepentant goofballs on stage. Making classic rock in 2015 is a dangerous proposition, the odds of simply retracing well-trod ground are high. Yet, the Stone Foxes make genre vitality seem easy. —Aaron Sankin

From: Philadelphia
Where: Wednesday, The Mohawk
Who: The song “Love Spell,” from bass-and-guitar duo Girlpool’s 2014 self-titled EP sounds like something that could have floated off Beat Happening’s Black Candy. That ‘90s Olympia, Wash., vibe might not be a coincidence. Guitarist Cleo Tucker and bassist Harmony Tividad’s vocal mesh is its own instrument, and “Slutmouth” might be their pop masterpiece: an ode to being yourself, not brushing your hair, and getting slut-shamed at work. Their debut LP, Before the World Was Big, comes out in June via Wichita Recordings, and it’s the perfect summer album. —Audra Schroeder

From: Southampton, U.K.
Where: The band is reportedly in town, but does not have an official or even unofficial scheduled performance listed online.
Who: That they have “Pale” in their name and sing about ghosts tells you a lot about these Brits—and syrupy, shoegaze-tinged, sad-sack jangle tracks like “Bodies” bear those first assumptions out. But this isn’t just another band for bros who’ve overdosed on Frightened Rabbit; on their latest EP, Places to Haunt, they prove capable of twee-leaning pop that stays nimble even as it soars to grandiose heights (“Wicked Dreams”) and scorched post-rock balladry straight out of a blasted American desert (“Evil Is Always One Step Behind”). Whatever the mood of their set, this quartet is sure to send a shiver up your spine. —Miles Klee

From: Los Angeles
Where: Thursday, The Parish Underground
Who: “I wonder what my exes are up to,” Michael Coomer mumbles on the opening notes of “The Fly.” You can’t help but to think of his old band, Harlem, a cashed outfit that lit Austin’s Red River clubs on fire way back in 2009 and released precisely one fantastic record for Matador with all the promise of a first-round draft pick. These days Coomer’s songwriting ditches the navel-gazing punk sneer of old Harlem gems like “Gay Human Bones” for concealed melody. November’s A Signed Piece of Paper is a gruff wander through his fascination with Los Angeles. He hates Whole Foods, thinks about Hologram Tupac, and homages the intersection where Biggie was gunned down on “Wilshire and Fairfax.” Definitely ponder his philosophy next time you’re under the influence: “I’m not trying to give advice to anyone that’s already died, I just wanna know what heaven’s like.” —Ramon Ramirez