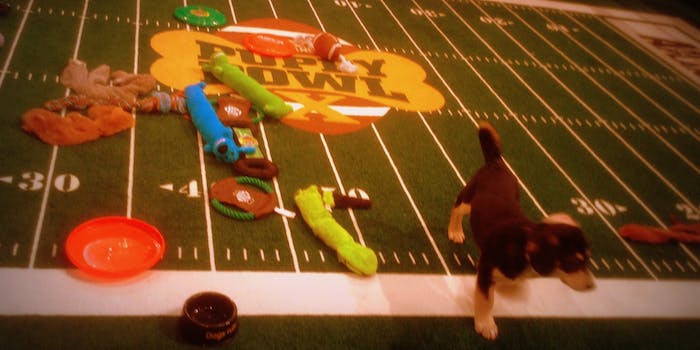 What time is the puppy bowl?

Sportsball not your bag? Try a different flavor of television.

We have a friend coming over to our house to watch Super Bowl XLIX. She politely asked who was playing in the big game.

Clearly, she is coming for the big vegan spread, but had she played party pooper and stayed home, inquiring minds wonder what she could have watched on TV other than the Pats–’Hawks matchup. Streaming services such as Hulu, Netlfix, and so on, have amplified her existing alternative TV options come Feb. 1, so avoiding NBC’s day-long programming of all things NFL is easier than in past years.

The non-Super Bowl TV options include:

Launched in 2005, The Puppy Bowl is a dog-lover’s dream as 57 puppies in two teams cavort around a model stadium under the watchful eye of an onsite member of the ASPCA. The players are from a variety of shelters, and are screened for their ability to socialize before the two-hour event (which is whittled from several hours of footage). Peanut butter is placed on the cameras used for filming to ensure the canines get up close and personal. There is an age and size limit for the contestants.

The 2014 winner was Loren, a Brittany. My heart, but not my money, is with Aria, an 11-week old-lab mix. She is from Found A Hound Rescue.

More of an agility contest than an actual feline-on-feline content, the Kitten Bowl features 90 cats from North Shore Animal League America and Last Hope Animal Rescue and Rehabilitation who will available for adoption after the games. Hosting this furry event are Beth Stern (Howard’s wife, and somewhat of a celebrity on her own), and one of the voices of the New York Yankees, John Sterling. Sterling will provide the play-by-play as the kitties run obstacle courses where they are lured with yarn and some cat-appropriate toys.

If you are looking for something on the pastoral side—perhaps a show to relieve your insomnia—we have Goldie the goldfish (what else would you call her) in her fish tank. Yep, that’s it. To make matters more fun—or more fun than the inaugural event—a clownfish has been added to the lineup. The anemonefish does not bear the name clown for its juggling ability; this sea creature is brightly colored, resembling a scary circus dweller.

Streamed live from L.A. (like the old Tonight Show), YouTube will present some counterprogramming to NBC’s Pepsi-sponsored Katy Perry sing-a-long (or sync-a-along, as the case may be) clearly aimed at millennials who shun the pop sensation as being too mainstream. Starring in the comedy/musical event are a collection of YouTube stars including Harley Morenstein (Mr Epic Food), Freddie Wong, Rhett & Link, and Toby Turner.

Billed as a spoof-fest, this YouTube experiment sounds like a lame ripoff of SNL. Suddenly, Katy Perry and Lenny Kravitz are sounding better.

On Feb. 1, the streaming giant will debut such classics as The Brothers Bloom, the 1958 Cary Grant and Sophia Loren comedy, Houseboat, and the first five seasons of M*A*S*H. Slim pickings.

Looking ahead to Super Bowl 50, perhaps we will see some new alt.SB50 programming. With cats, dogs, and fish spoken for, there’s always hamsters, snakes, and pot-bellied pigs.

Photo via Margalit Francus/Flickr (CC BY 2.0)