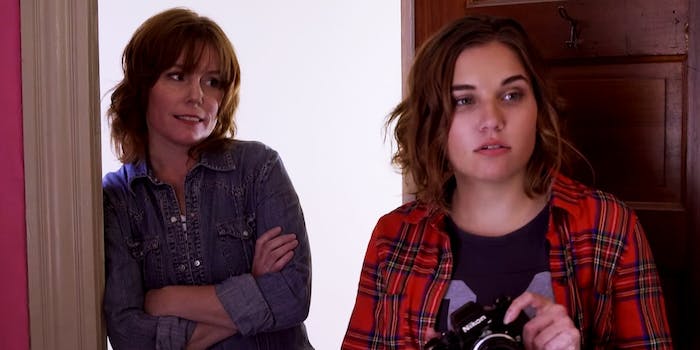 This YA novel is looking for a niche between R.L. Stein and Stephen King.

You move to a new town, to a spooky new house. You hear noises and see unexplainable things, but your mom, your only ally, doesn’t believe you and starts acting strange herself. What do you do?

That’s the premise of The Haunting of Sunshine Girl: Book One, a new paranormal YA novel that has YouTube roots. It all began as a shared idea between then-16-year-old Paige McKenzie; her mother, Mercedes Rose; and their business partner Nick Hagen, who had done some YouTube research to find the best topic to cover.

“On YouTube, the number-two-searched thing was ‘ghost.’ ‘Lil Wayne’ was number one. All the ghost channels at the time were all 30-year-old men, or 40-year-old men. [Nick had] worked with my mom previously on another paranormal-type project. We kind of got together and hashed out a general process.”

They came up with the idea of telling the story of a teen girl experiencing hauntings, helmed by McKenzie as the face and voice behind Sunshine.

“It was weird,” McKenzie explained. “We put up three or four videos, and then went ‘OK, let’s see what happens.’ Our first 5 million views were totally organic. It’s not my grandma watching. It’s complete strangers; that’s why he have a large, significant number out of the United States. After 5 million views, we started telling people that we actually knew.”

McKenzie was a total YouTube newbie when the channel launched in 2010, but she quickly adapted and learned what it takes to be a digital video success.

“Between the three of us, we had eight or nine hours of watching YouTube,” she laughed. “I don’t know what we were thinking, but it worked! I kind of want to do a little bit of everything. Sunshine has been an eye-opener if nothing else. It’s really great to see I can do other stuff. I can act, but also I do all the camera work. I do the editing; I’m a director. It’s fun to put on different hats. Now with the author business, I have a lot of things I have the potential to do someday if I wanted to.”

That’s right, 20-year-old McKenzie is also the voice behind the Sunshine Girl books, with the help of a coauthor. For her, collaboration seems natural. What doesn’t is the fact that with the written word, she can’t immediately get feedback from her tens of thousands of digital fans.

“The main difference is you could just film something and put [finished videos] up on YouTube and get immediate response,” she said. “With a book, I know the editor says she liked this, but it’s not immediate response. That’s been weird.”

While the first book is just hitting shelves today, there are already plans for a second book, coming in a year, and the series already has an option to head to the screen, thanks to the Weinstein Company.

“I am signed on to star; I will be Sunshine,” McKenzie said. “I will be her since it’s 99.8 percent me… I do want to be involved in casting. I’d love to be able to pick out who plays my mother. It’ll be fun to see what happens.”

For now, though, McKenzie is focused on the novels, which she feels fills a niche that’s missing in the literary landscape.

“I don’t think that there was a lot of YA horror out there,” she explained. “There hasn’t been YA paranormal in that way. I feel like you have R.L. Stine when you’re younger, and when you’re old, you have Stephen King. But you don’t jump from Goosebumps to Stephen King, so I’m excited to see that play out.”

Sunshine Girl does hit a spot that falls outside the current trends of young adult literature. It’s not postapocalyptic, and it’s not complete realism either. It’s somewhere in between. Yes, there’s some romance in the story, but without giving too much away, even the romantic elements play into the paranormal worry that pervades the book. The mystery is far more important that a girl wondering about her first kiss.

“I love romance novels—I am a romantic—but you’re supposed to go from creepy thing to love triangles with sparkly vampires?” McKenzie questioned. “I don’t want to write a book that has a love triangle, because that’s happened a million times. Or three best friends, like Harry Potter. This is just really about Sunshine.”