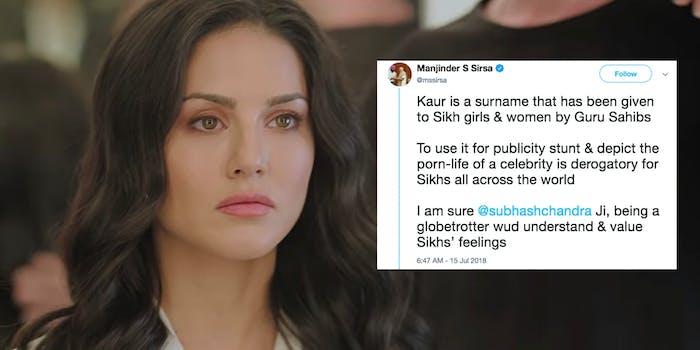 Sikh leaders are demanding that she remove 'Kaur' from the title.

The show, Karenjit Kaur: The Untold Story of Sunny Leone, has come under fire because its title includes Kaur. The name is given to Sikh females, Vice reports.

A spokesperson for Sikh organization Shiromani Gurdwara Parbandhak Committee said the webseries’ title is offensive because the actress is no longer affiliated with the religion.

“She changed her religion and cannot use Kaur with her name. It is a very pious suffix given to Sikh women by the Sikh gurus,” said the spokesperson, Daljit Singh Bedi, according to India Today. “The person who is not a follower of Sikh religion cannot use Kaur. She should tender a public apology as the title has insulted Sikhs.”

“We have no objection to Sunny Leone choosing her profession and getting a biopic made on her life but when has she advanced in this profession under the name Sunny Leone; why is Karnejit [sic.] Kaur name being used as title?”

Sunny Leone, 37, was born Kanenjit Kaur Vohra in Sarnia, Ontario. Her parents, both Sikh Punjabi, emigrated from India, according to Vice. Some people on Twitter defended the use of her given name in the biopic.

That’s part of her name. Who are you to decide whether @SunnyLeone can use her name or not? Don’t like a movie? Then don’t watch it. Stop being a bigot. Don’t be a vella. Find something else to do instead. https://t.co/WOXegkBZKN

The actress has not addressed the criticism. On Twitter, she’s been ramping up enthusiasm and promotion of the webseries, which premiered Monday on streaming website Zee5.

She previously told the Indo-Asian News Service that her biopic deals with “the unexpected.”

“This is a part of my life story and not necessarily the journey you are expecting to see,” she said.