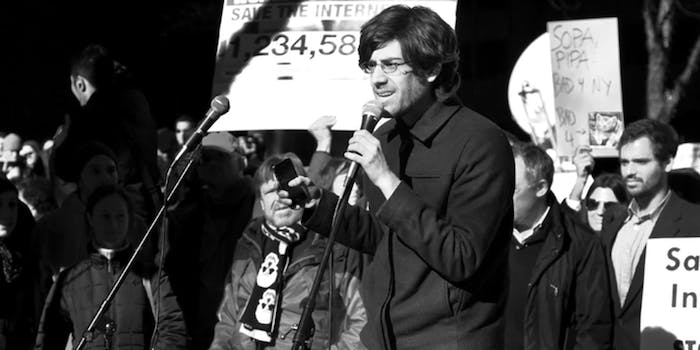 Are Kickstarter, Indiegogo, Netflix, and Vimeo the new festival darlings?

The 2014 Sundance Film Festival is currently in swing, and amidst the whiffs of celebrity and Jamaican bobsledder sightings, there’s a been shift among distributors looking for and pitching new projects: Crowdfunded films have taken up much of the scenery this year.

Kickstarter is raising its profile at Sundance, with 20 crowdfunded films screening during the week, including Room 237, the buzzed-about deconstruction of The Shining; Obvious Child, a comedy starring Jenny Slate; the Aaron Swartz doc The Internet’s Own Boy; and Alison Klayman’s Ai Weiwei doc, Never Sorry. The anticipated Rogert Ebert doc, funded via Indieigogo this month, premiered over the weekend, and viewers not at Sundance could stream it simultaneously via the film’s official website.

Unsurprisingly, Zach Braff’s Kickstarter-funded Wish I Was Here, which collected a staggering $3 million on the site last year, just landed a distribution deal. That Braff continues to have a fanbase that will support his projects isn’t  odd, but then there are photos like this one, snapped at Sundance, in which a backer of the film was apparently denied entrance to a screening to accommodate an actress. Seems like the model for big-name actors and directors soliciting funds from fans still needs some work. Producer Richard Guay announced his new crowdfunding platform, Passion First, during the festival, which he sees as a potential solution to the problem.

Zack Braff fan denied. He says a Kickstarter donor was expelled for an actress. pic.twitter.com/3morw1vi5z

Vimeo has raised the stakes on crowdfunding as well, announcing at the festival that they’d review any film that raised $10,000 or more on Kickstarter or Indiegogo. It will also premiere selected ones via the site’s fairly new Vimeo On Demand platform, which will help develop filmmakers’ projects and provide marketing for the films in exchange for an exclusive debut. Vimeo will also debut 13 films selected from the 2013 Toronto International Film Festival, from now until May.

Netflix continues to snatch up original documentaries, including Inside Mitt, the Mitt Romney documentary on his failed Presidential bid, which will premiere on Netflix Jan. 24, before Sundance even ends. This follows  their acquisition of The Square, which was nominated for an Oscar last week. Last fall, Netflix’s chief content officer encouraged theater owners to embrace partnerships with streaming outlets, and it looks like both Netflix (and, possibly, Amazon) might emerge as one of the top online buyers of original content at Sundance, documentaries especially.

With South by Southwest on the horizon, this could be the year film wasn’t made for a crowd, but by it.