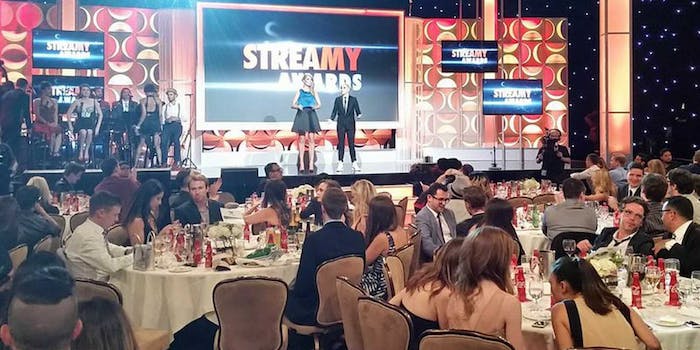 This fall, the Streamy Awards jump from the computer screen to your TV

The Internet's awards are coming to TV.

As the worlds of digital and mainstream entertainment edge ever closer together, it’s only fitting that the premiere digital-video awards show should find a home on a traditional TV channel.

This fall, the Streamy Awards will be broadcast live, for the first time, on VH1. The Sept. 17 awards show at the Hollywood Palladium will begin at 10pm ET, with a time delay for viewers on the West Coast. This will mark the Streamys’ fifth year of rewarding the best and brightest in the digital-video world.

“Our partnership with VH1 is not only a huge milestone for the Streamy Awards, but also a triumph for the entire creator community,” Streamy Awards founder Drew Baldwin said in a press release. “Having the full support of such a major media network validates what we have believed all along—native digital creators are integral to the future of entertainment.”

VH1 has recently made strides to appeal to digital natives, including a Behind The Tweet video series that parodies its iconic Behind The Music series with funny celebrity tweets. The network also launched an interview series hosted by What’s Trending‘s Shira Lazar to dive into famous YouTubers’ origin stories.

“The VH1 audience is connected on every platform,” VH1 president Tom Calderone said in a statement. “So it’s a natural for VH1 to celebrate the innovators who, like us, entertain literally millions of viewers.”

Photo courtesy of the Streamys