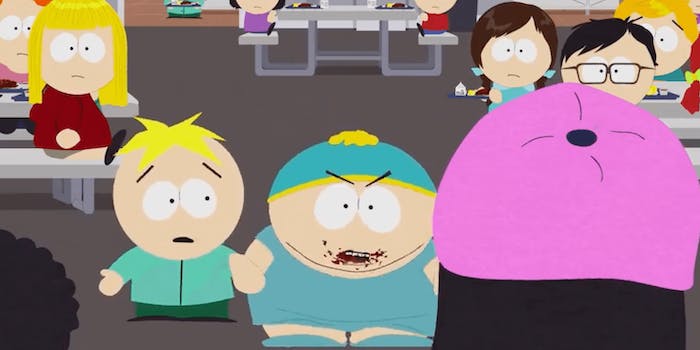 ‘South Park’ at the center of $500 million streaming war

The rights include a catalog of over 300 episodes and counting.

A war for domestic streaming rights to Comedy Central’s animated series South Park could end up in a deal stretching to $500 million for cable giant Viacom and creators Trey Parker and Matt Stone.

The streaming wars rage on. pic.twitter.com/wL9kUYacsq

Netflix–which scored global streaming rights to Seinfeld–has dropped out of the bidding, according to people familiar with the situation. Hulu, which has had streaming rights to the show since 2014, would like to keep the arrangement alive. CBS, which will soon merge with Viacom, is also in the mix.

Streamers are fighting for coveted reruns of the popular series in efforts to significantly bolster their respective libraries. South Park has never been a show like Friends or Seinfeld partly because of the cable vs. network aspect. However, the show offers a catalog of over 300 episodes, and counting, for its prospective customers.

The current big three –Netflix, Amazon, and Hulu–will soon be quickly followed by Apple TV+ and Disney+ in November. HBO Max–which has domestic streaming rights to Friends–along with Quibi debut in the spring. NBCUniversal will jump in with its own streamer, Peacock, in 2021–with rights to The Office in tow.

South Park premiered in 1997 and is currently in its 23rd season. The irreverent show was recently extended for three additional seasons on Comedy Central.

As controversial as ever, South Park set its 300th episode off with a bang: Characters said, “Fuck the Chinese government” three separate times during the episode. The statement’s backstory started in the previous episode, “Band in China,” which was censored and scrubbed from view in China after the episode parodied the country’s censorship of Western programming.

As a consequence, Apple will likely not extend an offer for the show, given its past history of avoiding conflict with China.