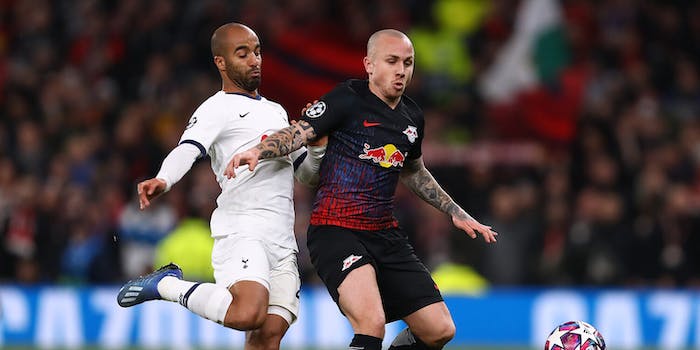 How to stream Tottenham Hotspur vs. RB Leipzig live

Spurs have their backs against the wall in a must-win Champions League match on Tuesday.

Here’s everything you need to know to live stream Tottenham Hotspur vs. RB Leipzig on Tuesday.

Tottenham heads into this Champions League match trailing 1–0 on aggregate, meaning it needs to score at least one goal to force the game into extra time, and two if it wants to walk away winners. Supporters are likely worried after watching Spurs’ latest match with Burnley, given that in the first half, their side looked dismal. Spurs manager José Mourinho made a double change at the break, which quickly shifted momentum and earned his side a penalty, duly scored—but Spurs still left with just one point.

Giovani Lo Celso made quite a difference in that match, and he’ll likely start this one, as he did the reverse fixture. Considering the number of shots Erik Lamela helped generate when he came in off the bench in London, Mourinho should consider inserting him into the starting lineup. Given the criticism Mourinho leveled at Tanguy Ndombele after the Burnley match, it’s unlikely he’ll be added to the starting midfield this time around.

As for RB Leipzig, it’s likely full of confidence as it welcomes this shaky Spurs side to the Red Bull Arena. Manager Julian Nagelsmann runs an impressively tight ship, an organized side capable of shutting down most teams in the world. And when playing against a negative side like Spurs, that’s made all the more easy for Leipzig, which certainly has the talent and the capability going forward. Timo Werner is truly world-class now, and only heroic saves by Hugo Lloris kept the score so tight last time. Spurs were thrilled to have him return ahead of the Burnley match, only to watch his blunder allow them an early goal. Should Lloris again be out of form on Tuesday, Tottenham may face a devastating scoreline.

RB Leipzig vs. Tottenham Hotspur: What to watch for

How Mourinho sets up his team and what approach he decides to use is likely key. Known for his pragmatic, almost conservative approach to matches, he’ll have to go against his own sensibilities, as Tottenham must score at least one goal. As Harry Kane and Son Heung-min are out, much of the responsibility will fall on Dele up front. However, both Lucas and Lo Celso did an excellent job coming off the bench at Burnley. If the three are able to exert enough pressure to slip through the organized system Naglesman has instilled in his team, it might just be enough to keep Spurs in the tournament.

But most wouldn’t count on it. RB Leipzig may have slipped to third in the Bundesliga, but its goalless draw against Wolfsburg this weekend shouldn’t give Tottenham much hope, given they were without Werner for the match. And it will almost certainly be their tailsman that makes the difference in this game.